Jake Tapper drops the hammer on GOP congressman over second special counsel: 'You keep saying this and you don’t know what you are talking about' 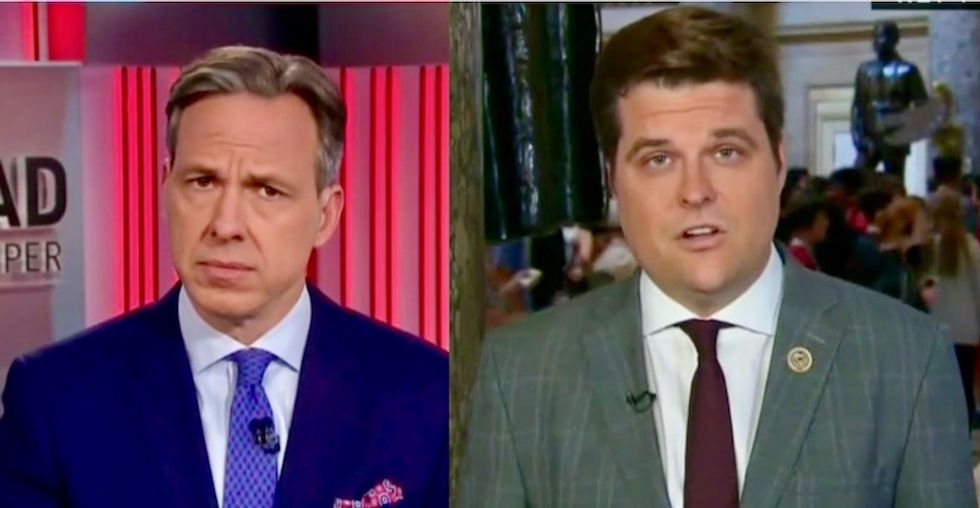 Having failed to clear the president through their intelligence committee investigation, House Republicans are asking for a second special counsel to try to target the enemies of Donald Trump.

"What crime are you suggesting might have taken place here?" Tapper asked.

"Well, here we see the potential collection of intelligence on the Trump campaign and we also see the misrepresentation of information before the FISA court which would violate Woods Procedures and something that we would absolutely want to get to the bottom of it and we’ve seen a number of personnel changes at the FBI and the Department of Justice that seem to indicate something is not right," Gaetz said.

Gaetz and Tapper then tangled over when the investigation of Trump was started. Gaetz made a number of statements that Tapper said the congressman could not reliably make without being on the intelligence committee.

"I have talked to people at the Justice Department who say you keep saying this and you don’t know what you are talking about," Tapper said.

Gaetz then went after Jeff Sessions and Rod Rosenstein.

"I think Mr. Rod Rosenstein is deeply conflicted and that in many cases he is playing Jeff Sessions and I think Jeff Sessions is functionally set off into a corner at the Justice Department on these critical issues or a legal or factual basis for his recusal and I think it has hurt the country," Gaetz claimed.