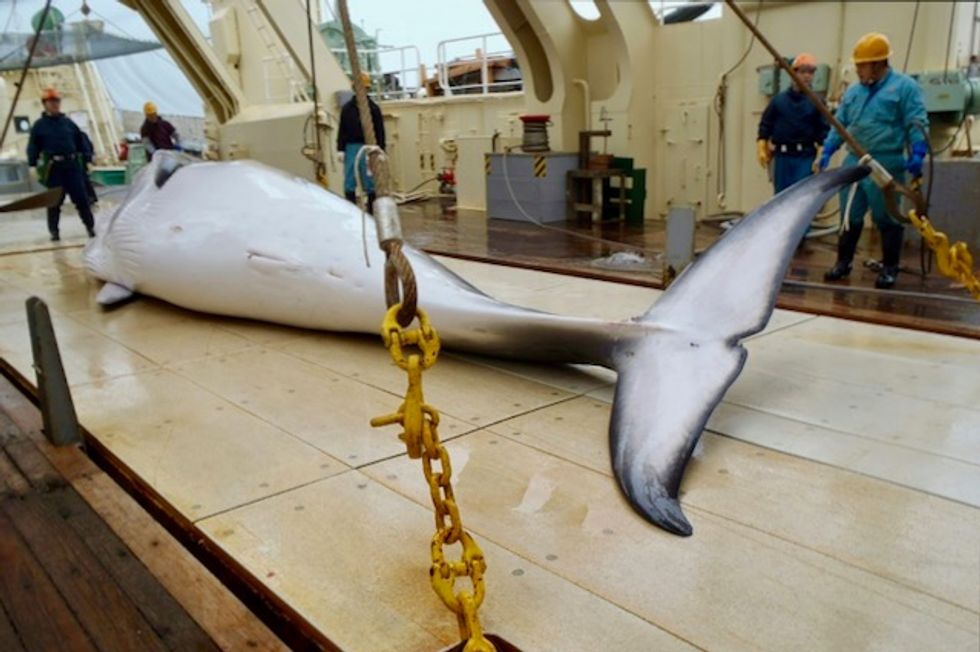 Japan's four-month expedition in the Antarctic ended in March after the fleet killed 333 minke whales, according to a report submitted by Japanese authorities to the International Whaling Commission last month FILES/AFP/File / Institute of Cetacean Research

The four-month expedition in the Antarctic ended in March after the fleet killed 333 minke whales, according to a report submitted by Japanese authorities to the International Whaling Commission (IWC) last month.

Of those, 122 were pregnant, according to the Japanese report, with dozens more immature whales among those killed.

Humane Society International, a conservationist group, called the figures "a shocking statistic and sad indictment on the cruelty of Japan's whale hunt".

"It is further demonstration, if needed, of the truly gruesome and unnecessary nature of whaling operations, especially when non-lethal surveys have been shown to be sufficient for scientific needs," said the group's senior program manager, Alexia Wellbelove.

Japan is a signatory to the International Whaling Commission, which has maintained a moratorium on hunting whales since 1986.

But Tokyo exploits a loophole allowing whales to be killed for "scientific research" and claims it is trying to prove the population is large enough to sustain a return to commercial hunting.

It makes no secret of the fact that meat from the expeditions ends up on dinner tables.

Japan's Fisheries Agency defended the hunt, saying it was not targeting pregnant whales.

"We catch whales totally at random," said Yuki Morita, an official in charge of whaling at the agency.

"The IWC scientific committee recognises the number of whales we hunt is at the level that is necessary for research, but not above the level that would hurt the conservation of the stock," he added.

"We'd like to stress here that the high ratio of pregnant females is noteworthy... This shows there are many mature females, suggesting we can expect growth in resources stock," he told AFP.

Japan has hunted whales for centuries, and their meat was a key source of protein in the immediate post-World War II years when the country was desperately poor.

But consumption has declined significantly in recent decades, with much of the population saying they rarely or never eat whale meat.

The submission to the IWC contains details of the scientific research that Tokyo says justifies the continued expeditions, including measurements on the weight and blubber thickness and stomach contents of the killed whales, and data on sighting locations.

In 2014, the International Court of Justice ordered Tokyo to end the Antarctic hunt, saying it found permits issued by Japan were "not for purposes of scientific research".

Tokyo cancelled the hunt the following year, but resumed it in 2016, also killing around 300 minke whales.

Earlier this year, the fisheries ministry confirmed it was studying a possible upgrade to its ageing lead whaling ship, and Prime Minister Shinzo Abe vowed to continue the hunts.

"We will pursue all possibilities in order to resume commercial whaling, including opportunities at the September meeting of the IWC," he told parliament, when asked to comment on the nation's policy.