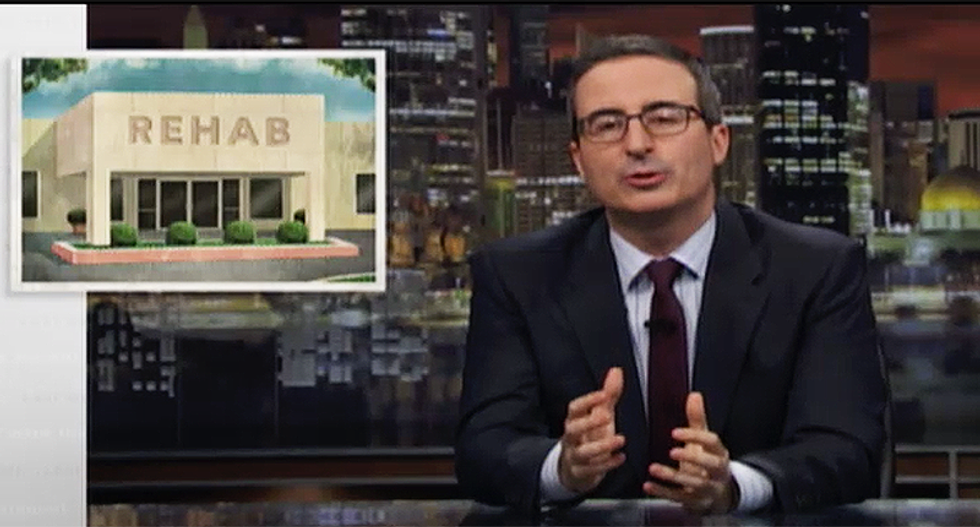 The United States is being crushed under the weight of an opioid epidemic that is claiming tens of thousands of Americans. In fact, the National Institute on Drug Abuse charts more than 64,000 deaths from addiction. Yet, rehab centers all over the country are largely unregulated with little accountability to the state or federal government.

John Oliver's expose revealed the shameful ways in which rehab centers are outright lying about their successes, or, at the very least, they're being mislead by all of their previous patients. The HBO host noted that he's grateful the world has moved on from the assumption that addiction can be "cured" with will-power and instead begun recognizing it as a disease. However, he urged the world to get behind some actual accountability for the centers claiming miracle cures.

While Presidents George W. Bush and Barack Obama both worked to expand funding to rehab and demand rehab facilities be paid by insurance, there remains no set definition of what an actual rehab facility must entail. There are no federal standards for counseling programs, detox or specific results that they're required to prove or even chart progress.

The Center on Addiction conducted a study in 2012 that proved "the vast majority of people in need of addiction treatment do not receive anything that approximates evidence-based care."

He cited Florida, which has become inundated with overdose deaths in its rehab facilities. Lake Worth County Commissioner Andy Amoroso went so far as to urge people to "stop sending your loved ones to south Florida, because we're sending them home in bodybags."

"Holy sh*t," was Oliver's response. "That is the worst, and yet, possibly the most honest tourism slogan for Florida I've ever heard."

During Sunday's "Last Week Tonight," Oliver specifically called out Passages in Malibu for the claim that they send patients home "totally cured" and "you will never use drugs and alcohol again." The host followed footage of their promises with "bullsh*t!"

Passages isn't alone, however. Oliver showed footage of the documentary "The Business of Recovery," interviewing University of New Mexico professor William Miller, who called around to rehab facilities to ask about the success rate.

"The lowest rate we got quoted was 80 percent," he said. "Then we would ask, on what data do you base that? And no one had any data."

Oliver wondered why they even bother stopping at 80 percent and instead claim a 140 percent success rate. It turns out that the success rate statistics come from self-reported statistics. So, when the rehab facility calls the former patient to ask how things are going, the patient says that everything is great, and the rehab facility reports it as a success. The facility has no way of knowing whether or not the patient on the other end is drinking or doing drugs while they're talking.

The same documentary interviewed a former patient, who explained that the last thing he wanted to do is report his relapse. "I was embarrassed to say that I didn't stay sober," he confessed.

Oliver then focused on some of the "bullsh*t" therapies that places claim will cure addiction. One is equine therapy. One former addict on the documentary noted he didn't even like horses and that petting a horse was "not going to do a godd*mn thing to cure my addiction."

Turning to bash Cliffside in Malibu, Oliver explained that the founder of the rehab facility got a little defensive when asked why his facility costs $73,000 monthly. In a VICE report, Cliffside founder Richard Taite explained that a month's stay at the Four Seasons would cost $40,000 and nothing there would change one's life.

"Everything we have done here is mindful," he told VICE. "It only seems like horsesh*t to people that don't know better. You don't have to know better, bro, because your life didn't depend on it."

When asked where his patients were on that particular afternoon, the founder of the rehab center couldn't tell the reporter. However, he did say they were probably out doing a "therapeutic meeting" somewhere.

With prices like Cliffside it isn't hard to see why rehab centers scores over $35 billion annually among their over 14,500 centers in the United States.

It's unclear if the state or federal government will ever be willing to try and regulate them, but as it stands now, President Donald Trump's commission on stopping the opioid addiction has refused to even meet with the Office of National Drug Control Policy. He's also appointed a 24-year-old campaign staffer as the deputy drug czar.