'They know we can see, right?': Colbert mocks Trump 'thug' for raiding doctor's office just to keep balding a secret 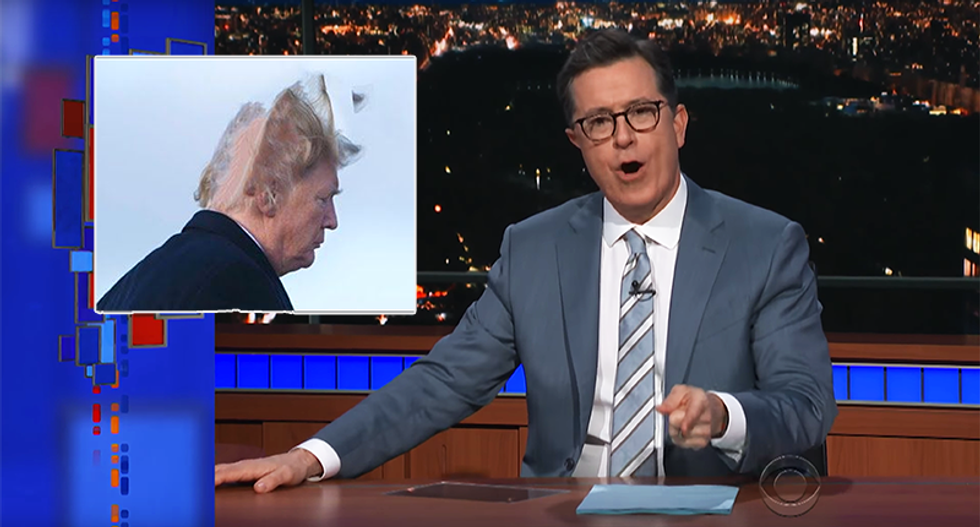 Dr. Harold Bornstein might have alerted the world that President Donald Trump is taking the drug Propecia for baldness, but it was a swift Washington wind that revealed to the world the truth about the president's hair loss.

In his Tuesday commentary, "Late Show" host, and man who actually has hair, Stephen Colbert joked about the president's body guard being sent to Bornstein's office to take all of Trump's private medical records.

“Now, taking hair-growth drugs is not something Trump should be embarrassed about,” Colbert said. “He should be angry that they do not work.”

“They muscled their way into Trump’s doctor’s office to steal evidence that Donald Trump is going bald?” Colbert wondered. “They know we can see, right? Are they also going to take away wind?”

Given Trump's hostile encounters with wind, it wouldn't be the first time he took extra strides to protect the image of his lush locks.

“But perhaps the saddest detail of this story is when Trump’s thugs saw this photo of Bornstein and Trump in the waiting room and they asked him to take it off the wall,” Colbert added. “Damn. When Trump breaks up, he goes full middle-school girl!”

Meanwhile, Trump's former doctor railed against the so-called "raid," calling it another "Watergate" break in.

“Forget Propecia,” Colbert said. “When he says that, I feel like Bornstein just prescribed me Viagra.”