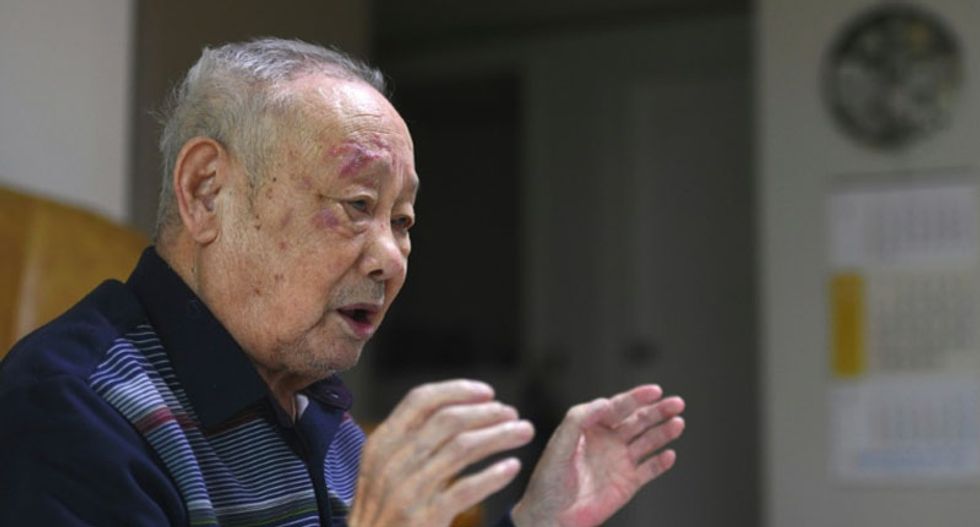 Choi Deuk-soo, 91, is one of just five people still alive to have been awarded South Korea's top military medal, the Taeguk, given for a suicidally brave charge he made up an enemy-held hill in the end stages of the 1950-53 Korean War. (AFP / Jung Yeon-je)

As a decorated war hero who once took out three machine gun nests with nothing but grenades, Choi Deuk-soo knows first hand what is at stake should US-North Korean peace talks fail -- and he is doubtful of an imminent breakthrough.

The wizened 91-year-old is one of just five people still alive to have been awarded South Korea's top military medal, the Taeguk, given for a suicidally brave charge he made up an enemy-held hill in the end stages of the 1950-53 Korean War.

"I hate any war," he told AFP from his apartment in Incheon, west of Seoul, apologising for his poor hearing, the result of firing a heavy machine gun for hours during a battle to repel Chinese troops that had come to the aid of North Korea's communist forces.

That war led to an armistice and the two Koreas divided by the demilitarised zone. It is a festering Cold War sore that lives on today, and US President Donald Trump has vowed to combat the threat posed by the authoritarian, nuclear-armed regime in Pyongyang either by talks with his North Korean opposite Kim Jong Un or "fire and fury".

Choi -- who was speaking to AFP before Trump cancelled an upcoming summit with Kim only to suggest it might be back on -- is not convinced by the recent flurry of diplomatic detente.

"Another war might have to break out sometime in the future, maybe hundreds of years from now, for the two sides to be reunified," he said.

"I doubt whether any deal with Kim Jong Un would hold long because all the North is interested in is material rewards," he added, questioning whether Pyongyang was really committed to giving up its nuclear weapons or genuinely seeking peace.

The nonagenarian's cynicism was forged in the crucible of the Korean War and nurtured by decades of failed peace attempts that have seen North Korea's regime remain steadfastly in power and oversee its metamorphosis into a nuclear armed state.

Breathing repeatedly through an inhaler to ease his asthma, Choi recalled his own horrifying experience the last time full-scale war broke out on the Korean Peninsula.

The memory that sticks with him the most was the night that won him the Taeguk.

On 30 June 1953 his unit was ordered to take back Hill 938 from a brigade of Chinese volunteers who had seized the strategic position earlier that month.

Choi's battalion was so depleted its ranks had dropped from 500 to just 30 men.

"The top commander gathered us together and handed out cigarettes. He then said: 'You only move on. No retreat'. The company installed a machine gun, threatening to shoot us if we tried to retreat," he recalled.

To improve their agility, the soldiers were told to ditch their helmets and take only grenades -- the commanders noted that if they needed a rifle they could always grab one from the hundreds of bodies littering the hill side.

Under cover of darkness and a smoke screen Choi and his comrades inched towards the enemy.

"I crawled up to a machine gun post and hurled the first grenade. I finished a second one with another grenade and silenced a third machine gun nest with the remaining two grenades," he said.

Somehow Choi emerged unscathed. But only five men from the original 30 survived the night, he recalled.

The war ended a month later with the armistice, though the two Koreas remain technically still at war.

Choi said he welcomes the fact that Trump was willing to talk to Kim.

But he worries about the more bellicose members of the US administration, particularly National Security Advisor John Bolton, a known North Korea hawk.

Earlier this month Bolton -- and later Vice President Mike Pence -- raised the spectre of Libyan leader Moamer Khadafi, who gave up atomic weapons only to die years later at the hands of US-backed rebels.

"That guy with the thick moustache almost blew it up with reckless, unnecessary statements," Choi fumed, referring to Bolton.

His hopes for peace are tempered by a cynical realism that comes from decades of witnessing the Korean conundrum, one of geopolitics' stickiest issues.

Last month, like millions of others, Choi watched on as South Korean president Moon Jae-in met Kim in the heart of the DMZ. They shook hands and, at the invitation of Kim, Moon briefly stepped into North Korea.

"I thought this was a good thing," Choi recalled thinking about the current detente. "But then the next moment, I wondered how long it would all last this time around."