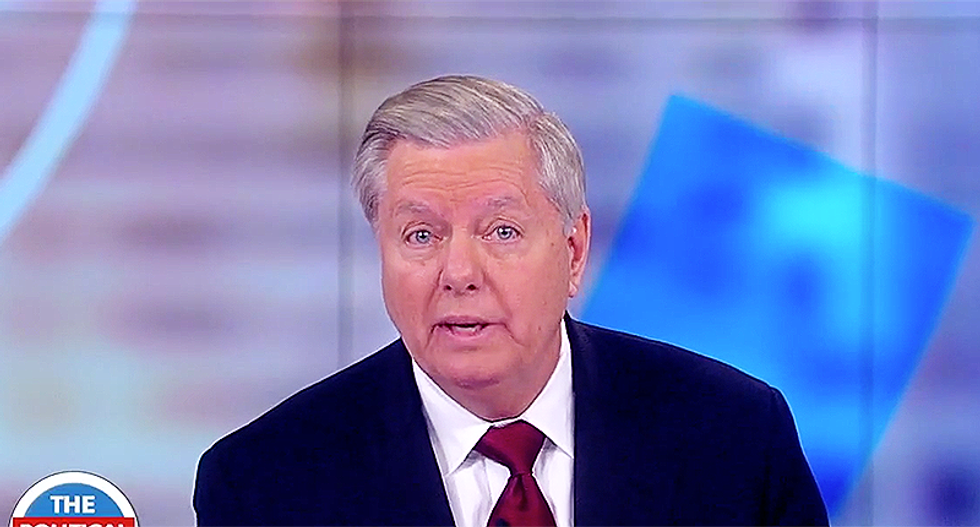 During a speech to the Rotary Club in South Carolina's capitol, Sen. Lindsey Graham (R-SC) reportedly bragged about his relationship with Donald Trump — and said he called the president "crazy" when speaking with a foreign diplomat.

"If you don't think Trump's crazy, then you're crazy," Graham told the crowd, as flagged by the Charleston Post and Courier's Columbia bureau chief Andy Shain.

According to Shain, the South Carolina Republican also called Trump "volatile," "a genius" and "a handful," and responded to reports that Sen. John McCain (R-AZ) asked for Trump to not attend his funeral.

"I have no idea if that’s true," Graham told the crowd at the Columbia Rotary Club. "There’s a lot of things being said."

.@lindseygraham on a @nytimes report that @SenJohnMcCain does not want @realDonaldTrump at his funeral: “I have no… https://t.co/zyqkiMP7Zi
— Andy Shain (@Andy Shain) 1525716771.0

Ted Cruz: 'Of course' Trump was wrong to call for terminating Constitution

U.S. Sen. Ted Cruz denounced former President Donald Trump for suggesting a “termination” of the Constitution in order to overturn the 2020 election, while also framing the comment as an oversensationalized distraction. The Texas Republican offered his remarks three days after Trump’s initial comment and after prodding from reporters.

“Oh listen, of course what he said was wrong,” Cruz told Nexstar on Tuesday. “But I also think the media is engaged in a feeding frenzy. I’ve never seen reporters so excited as to run up to every Republican and say, ‘Please, please, please attack Donald Trump.’”