Living with a volcano means dealing with its goddess 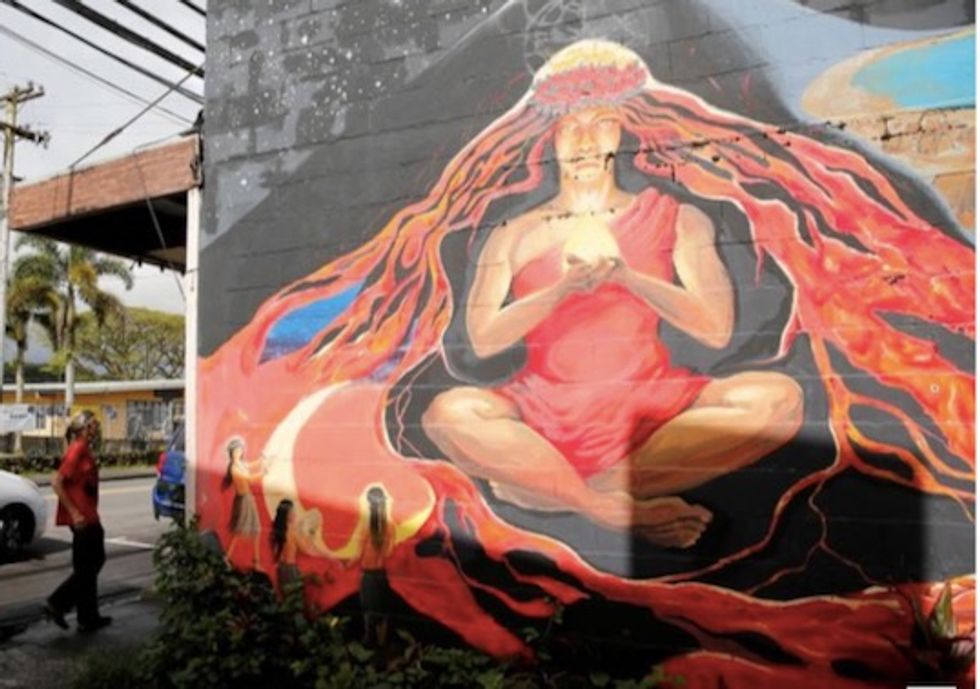 FILE PHOTO: A mural of the Hawaiian goddess Pele is depicted on a wall of a local art gallery in Pahoa, Hawaii, U.S., May 25, 2018. REUTERS/Marco Garcia/File Photo

During one of his daily briefings about the relentless eruptions of the Kilauea volcano recently, Hawaii County Mayor Harry Kim noted the day had brought no eruptions, no lava, no ashfalls.

“Pele has given the grace of quiet to us today,” Kim told residents, both native Hawaiians and those who moved there from abroad, at the Pahoa high school meeting.

He took it for granted they all knew he was talking about the legendary goddess that lives in the Halemaumau crater of Kilauea, which has been almost continuously active since 1983.

Living under one of the world’s most active volcanoes means learning to live with a fickle force of nature, personified by Pele.

“She is the reason we are here. She made Hawaii,” he says, referring to the fact the Hawaii Islands were formed from undersea volcanic eruptions.

Signs of Pele can be seen everywhere.

Paintings of her in the gift shops and galleries of Pahoa town by the slopes of Kilauea typically portray a women with long, flowing hair in the shape of a volcano, hands cupping a ball of fire or dressed in a fiery garment.

A homage to Pele is usually featured in Hula dance performances on the Big Island.

“Pele’s hair” are wispy strands of glass formed out of the lava fountains erupting from ground fissures in communities around the volcano. The wind has scattered her “hair” far and wide, and can be seen hanging from trees and telephone poles.

She features in Hawaii’s famous Hula dances, including one named Kilauea, with the lyrics:

“At the heights of Kīlauea,

Are seen the fires of the woman.

Surging back and forth.”

Residents of Leilani Gardens, who were evacuated after lava fountains erupted from several fissures there, have placed offerings of flowers and ti leaves, used to make Leis, on the oozing lava flows.

They are allowed back into the neighborhood to check on their homes for a period each day. For some, it’s also a chance to watch the pyrotechnic eruptions.

“This is my second experience of an amazing display of Pele’s power,” says Hannique Ruder, 65, “It’s devastating and beautiful at the same time. We’re all in fear of her power, and yet you have to see the creative force at work here as well.”

Glenn Canon, 61, a retired respiratory therapist, and his wife were also among those evacuated from Leilani Gardens. He’s now planning to move to a rental home in Hilo, far from the volcano.

“We don’t want to leave. We settled in for our retirement and planned to stay right there. It looks like Madame Pele has other plans for us. This is her land and when she wants it back, she’ll take it from us.”