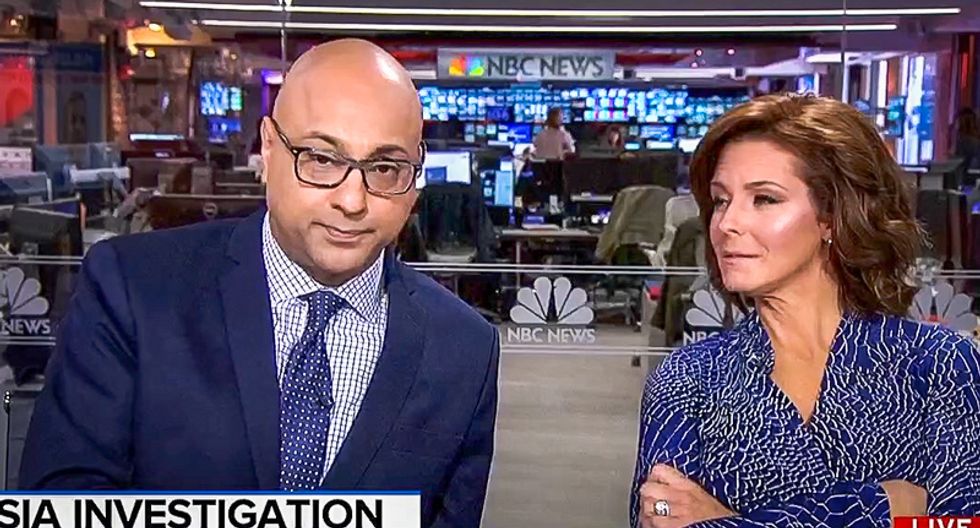 MSNBC host Ali Velshi on Tuesday asserted that it is "ludicrous" for President Donald Trump to deny that his presidential campaign colluded with Russia in an effort to win the the 2016 election.

During Tuesday's Velshi & Ruhle program, Velshi ran down the list of known contacts between the Trump campaign and Russian assets, agents and oligarchs.

"There's a lot of stuff in the president's [Tuesday morning] tweet that's not true, but let's actually run through the one in which he says, 'Oh, there's no collusion,'" Velshi said.

The MSNBC host began his list by noting that special counsel Robert Mueller reportedly wants to ask Trump about former National Security Adviser Michael Flynn's phone conversation with former Russian ambassador Sergey Kislyak and "whether or not these two guys discussed sanctions during the transition."

"Mr. President, that would actually be collusion," Velshi explained. "And in more recent memory, the alleged offer of a pardon by [former Trump lawyer] John Dowd to Mike Flynn."

"And the president contacts with Michael Cohen, Felix Slater and others about real estate efforts on the Trump organization side in Moscow. Was the president involved, by the way, in the GOP platform change, removing language regarding Russia's annexation of Crimea from Ukraine? And former campaign manager Paul Manafort's outreach to Russia during the campaign; Roger Stone's contact with Wikileaks founder Julian Assange; and Erik Prince's alleged meeting [with Russians] in the Seychelles... set up by George Nader, who is now a cooperating witness."

Velshi added: "So the idea that President Trump says that the leaked questions [from the special counsel] suggests that there's no question about collusion is about as ludicrous as me saying that I'm often mistaken for Brad Pitt while walking down Fifth Avenue."

"I want to tell you, when you were going through [the evidence of collusion], it upset my stomach," co-host Stephanie Ruhle told Velshi. "It makes me anxious."