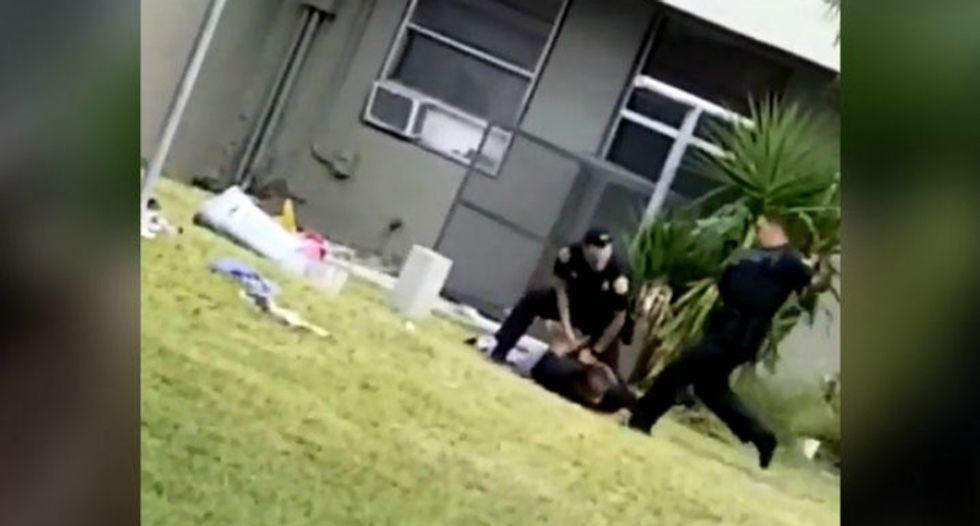 Viral video of a Miami PD officer kicking a prone, handcuffed man in the head. Image via screengrab.

A Miami police officer has been suspended from the force less than 12 hours after a video of him kicking a handcuffed man in the head went viral.

The Miami New-Times reported Thursday that Miami Police Chief Jorge R. Garcia said a still-unnamed officer has been "relieved of duty" and may face an investigation after being caught on video handcuffing a man on the ground and then kicking him in the head. Garcia said in the statement that the officer's actions were "a clear violation policy."

Today, the City of Miami Police Department received a video of an incident involving one of my officers. The video… https://t.co/NDhr3qiKyb
— Miami PD (@Miami PD)1525367479.0

Lisa Harrell, the woman who originally posted the video to Facebook, told the New-Times that she witnessed and recorded the incident at about 9:40 AM on Thursday morning in Overtown, a "majority-black neighborhood whose residents have complained for decades about overzealous and often brutal police tactics."

The video stars with a man on the ground as an officer handcuffs him. Seconds after being cuffed, another officer runs up and kicks him in the head and then moves to tackle the prone and bound man. Two more officers come up and appear to speak to the other two cops as a person in the background is heard yelling "they didn't have to do all that."

WATCH: A City of Miami police officer has been relieved of duty after this video showing the officer kicking a man in the head while he was being cuffed on the ground went viral on social media. @WPLGLocal10 https://t.co/yuGmyvCsCL pic.twitter.com/1R5xkPR8W3

As the New-Times Jerry Iannelli pointed out, this is far from the first time MPD has come under fire for use of excessive force.

"Multiple videos published in 2018 have shown MPD officers choking suspects or grabbing them around the neck, for example," Iannelli wrote. "Just this week, the city's Civilian Investigative Panel, a group that probes complaints against the police (but lacks power to punish officers) ruled a group of Miami cops violated both departmental policy and Florida state law by strip-searching a woman in the middle of a busy Wynwood street."

Those MPD officers, he continued, were cleared of wrongdoing by the department.