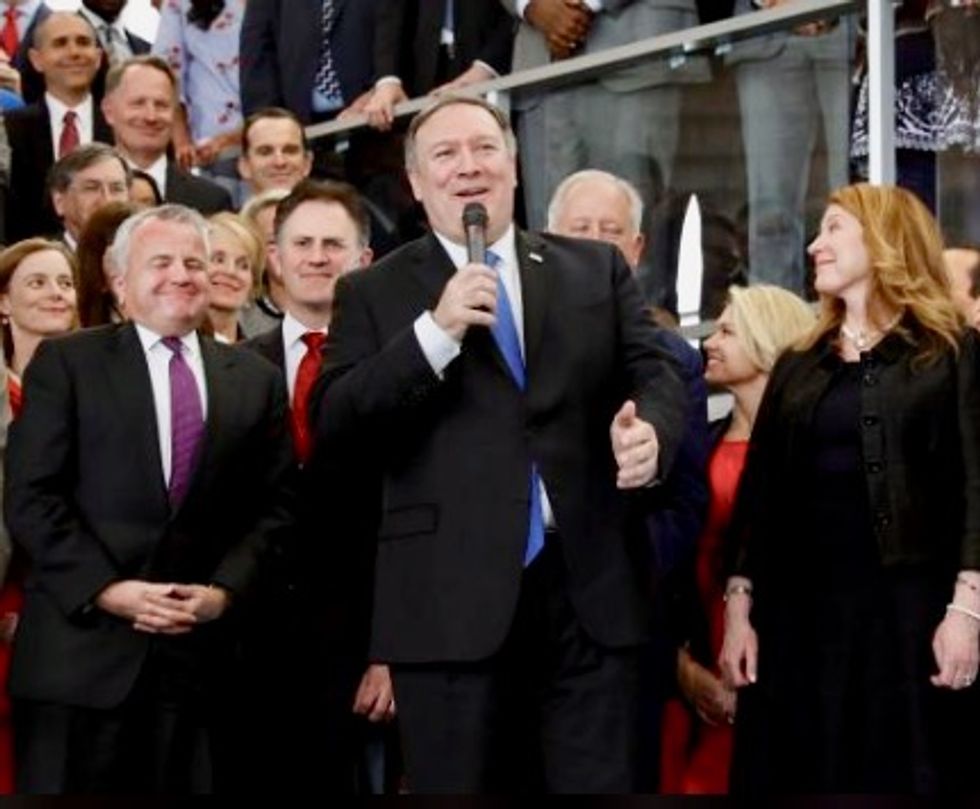 New U.S. Secretary of State Mike Pompeo delivers remarks to employees on his first day at the State Department in Washington, U.S., May 1, 2018. REUTERS/Kevin Lamarque

U.S. Secretary of State Mike Pompeo, arriving for his first day at the State Department, said on Tuesday he would help the U.S. diplomatic corps in “getting back our swagger” but offered few details about his plans for the agency.

Pompeo, who was confirmed last week in his role before immediately setting off to meet with allies in Europe and the Middle East, avoiding the customary first day at the State Department, joked that he now held the record for the longest trip to the first day of work.

“I talked about getting back our swagger, and I’ll fill in what I mean by that, but it’s important. The United States diplomatic corps needs to be in every corner, every stretch of the world, executing missions on behalf of this country and it is my humble, noble undertaking to achieve that,” Pompeo said to loud applause from several hundred diplomatic staff.

In the Trump administration, the State Department has been shaken and demoralized by the departures of many senior diplomats and a hiring freeze, and has found itself sidelined by the White House on foreign policy.

Pompeo’s remarks were brief and without any detail on possible changes in store for the department. He is a former congressman who headed the Central Intelligence Agency from January last year until last week and is seen as a loyalist of U.S. President Donald Trump.

Trump would formally swear him into the new post on Wednesday, Pompeo said. It will be Trump’s first visit to the department.

Trump fired his first secretary of state Rex Tillerson in March after public rifts on North Korea, Iran and Russia.

The United States is preparing for a historic meeting between Trump and North Korean leader Kim Jong Un and the United States pushes for changes to the 2015 Iran nuclear deal, which Trump has threatened to abandon.

Israeli Prime Minister Benjamin Netanyahu said late on Monday that Israel would publish evidence it says it has of past Iranian nuclear arms work.

While Pompeo suggested the United States was still working on language to “fix” the 2015 deal, Netanyahu said the evidence showed Iran lied going into the deal.

Additionally, tensions between Washington and Moscow have increased over U.S. intelligence agency allegations that Russia meddled in the 2016 U.S. election and Moscow’s support for Syrian President Bashar al-Assad in a seven-year war.