‘Mrs Trump #4?’ The internet roars with laughter after Trump tweets a shout-out to Tomi Lahren 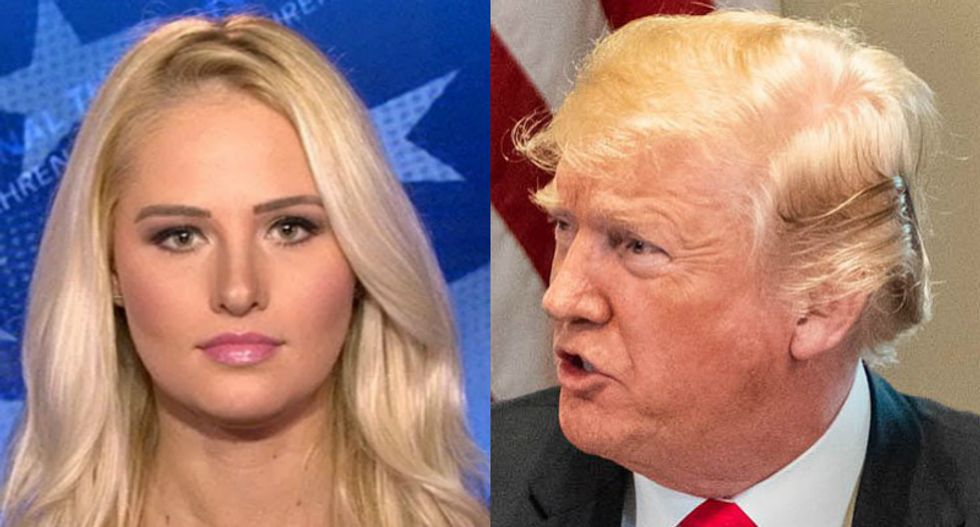 After Fox News pundit Tomi Lahren got a drink thrown on her in a Minneapolis restaurant, President Donald Trump took to Twitter in her defense.

Lahren appeared Wednesday morning on “Fox & Friends” to discuss the incident, and the president rallied his followers around her a short time later on social media.

"Everybody is with Tomi Lahren," the president tweeted Wednesday morning. "A truly outstanding and respected young woman!"

Immediately after, Twitter did what it does best by making fun of Trump's hyperbolic (and inaccurate) pronouncement.

"Actually," journalist Victoria Brownworth tweeted, "we all think Bumpstock Barbie is a wilfully ignorant racist who isn't bright enough to have a license to carry."

"Could she be Mrs. Trump #4?" comedian Dean Obeidallah mused.

"Maybe you don’t understand what the word 'everybody' means," pro wrestler Hurricane Helms noted. "Tomi Lahren looks like she smells like mayonnaise and despair."

I’m not. So, maybe you don’t understand what the word “everybody” means. Tomi Lahren looks like she smells like may… https://t.co/X7DhtAky0X
— Hurricane Helms (@Hurricane Helms) 1527077529.0

Check out more hilarious responses to Trump's Tomi shoutout below.