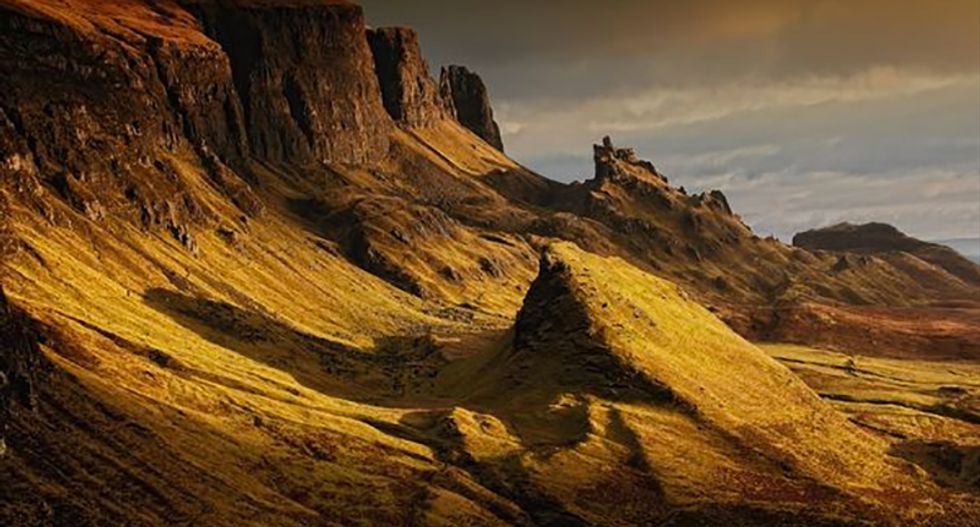 Nitrogen is one of the most important resources for people, ecosystems and the planet. It’s found in all sorts of essential molecules, including DNA, protein and cell walls. Life - and humanity - cannot exist without adequate access to this precious nutrient.

For many years, researchers believed that essentially all of the nitrogen in the world’s natural plants and soils originated from the atmosphere, where it makes up about 78 percent of the air we breathe. But in a recent study, my colleagues Scott Morford, Randy Dahlgren and I discovered that up to a quarter of the planet’s terrestrial nitrogen originates from weathering of bedrock.

As a global environmental scientist who has been studying nitrogen, climate and ecosystems for over a decade, I found this result surprising. And it has big implications for people and the planet. If there is more nitrogen available in Earth’s system than scientists have thought, it could fuel extra photosynthesis by plants, increasing the rate at which they pull carbon pollution out of the atmosphere.

But this isn’t a solution to climate change, contrary to what some prominent pundits have contended. Rock weathering is no magic answer: It simply does not supply nitrogen fast enough to radically slow warming over the next 100 years. 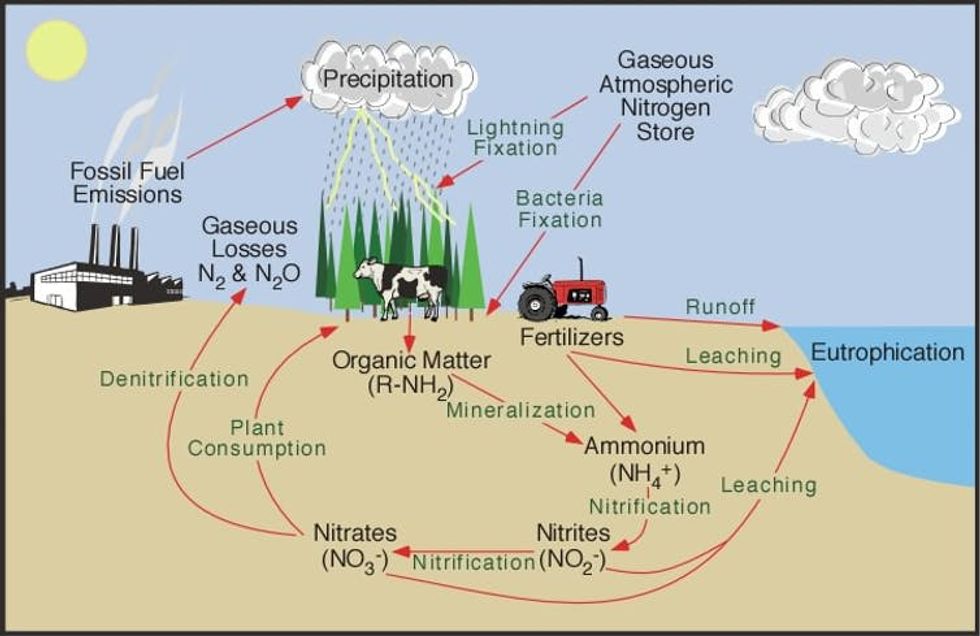 Traditional view of the nitrogen cycle, including human contributions from fossil fuel combustion and use of synthetic nitrogen fertilizer.

Geologists have long known that there’s a lot of nitrogen in rocks, but our study was the first to show that this nitrogen is released quickly enough to influence plant and soil nutrient cycling on a global scale. Nitrogen inputs are critical to maintaining ecosystems because they lose a bit of nitrogen every year. Rain washes it out of soil, and bacteria convert it to gaseous forms that escape to the atmosphere. Without ongoing access to new nitrogen sources, plants eventually would stop growing and pulling carbon dioxide out of the air.

Our study used several different techniques to show that rocks are an important component of the planet’s nitrogen cycle. In cases where weathering rates are high and sedimentary rocks contain a decent quantity of nitrogen, they actually provide more nitrogen than the atmosphere. We pulled together decades of data on where nitrogen exists - in the atmosphere, rocks, the ocean and Earth’s mantle (the rock between its crust and its core), and used this information to build a picture of the planet’s nitrogen budget.

This work revealed a critical role played by rock weathering. Many processes gradually break rocks down over time, including freezing and thawing, chemical reactions, and impacts of living organisms such as lichens and tree roots. Weathering releases nitrogen, replenishing nitrogen that continental erosion carries to the ocean over millions of years. 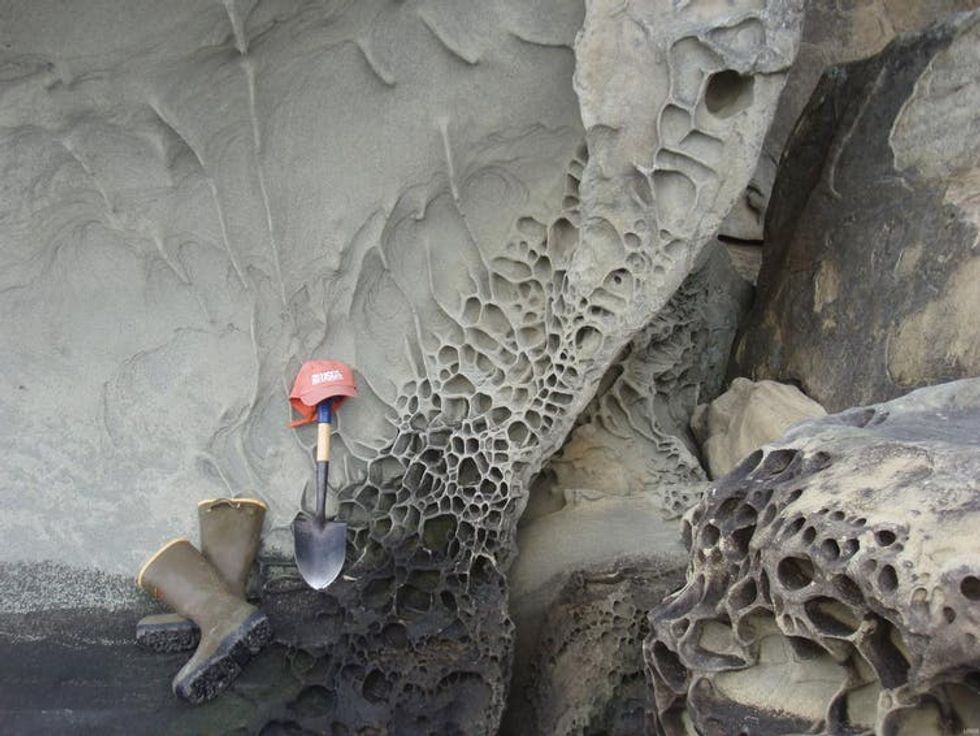 Sandstone weathering on the shore of Puget Sound, caused when expanding salt crystals break fragments of rock, creating small holes that become larger as the process repeats over time.

This initial finding was supported by a suite of classic geochemical models, evidence built from our global rock nitrogen inventory, and a new global computer model that we created for this study.

Until now researchers had assumed that the atmosphere was the main source of nitrogen for Earth’s ecosystems. But they also had trouble explaining how so much nitrogen accumulated in ecosystems if it came solely from the atmosphere.

We identified bedrock as the source of this “missing nitrogen” by showing that rock weathering could help to meet nitrogen demand from plants and animals. In mountainous regions and areas with moist climates, where rocks are exposed and tend to weather quickly, we estimate that rock weathering doubles the amount of nitrogen that enters natural ecosystems.

What does this mean for the carbon cycle and global climate change? Several computer simulations have shown that nitrogen affects carbon storage in a way that could substantially alter the amount of global warming that occurs in this century. Our past work showed that ecosystems living on nitrogen-rich bedrock contained twice as much carbon in their soils and trees as those on nitrogen-poor bedrock. The nitrogen in the rock was feeding the ecosystem, allowing plants to accumulate more biomass than sites without much rock nitrogen weathering.

But rock nitrogen has always been a part of the planet, even if we weren’t terribly mindful of it. Our study makes explicit a process that is already affecting the planet’s carbon cycle. And it helps explain how plants and soils have absorbed roughly 30 percent of carbon emissions from human activities, even though nutrient constraints on plant growth are widespread.

Globally, ecosystems still derive more nitrogen from the air than from rocks. Nonetheless, our findings may help make global climate models more precise and resolve some puzzling observations at higher latitudes, which tend to hold more nitrogen in rocks. For example, boreal forest zones in northern Canada and Eurasia are storing carbon at a level higher than many scientists would have predicted, and are greening in response to climate change. We expect these regions may have high levels of nitrogen from rock weathering.

NASA scientists used almost 30 years of data from the NASA/U.S. Geological Survey Landsat satellites to track changes in vegetation in Alaska and Canada. Of the more than 4 million square miles, 30 percent had increases in vegetation (greening) while only 3 percent had decreases (browning).

Rock nitrogen won’t save us from climate change

Some pundits have argued that our work shows scientists don’t have a firm grasp of such issues as global climate change. This view is wrong.

Our study highlights a role for rocks in supplying nitrogen to terrestrial ecosystems. It challenges a paradigm that was established as far back as the late 1800s, but this doesn’t make us doubt the scientific process. Instead, we recognize that questions must always drive our thinking – for example, “I wonder whether rock nitrogen matters to the planet?”

Others have misinterpreted our work as evidence that the risk of extreme climate change has been overblown. For example, conservative commentator Rush Limbaugh opined, “It’s a scientific report that carbon dioxide, CO2, that which causes the greenhouse effect, is much, much, much less impactful than anybody knew.”

Wrong again. Our study said no such thing, and it does not imply that curbing global climate change is less urgent. Rock nitrogen can help fertilize the carbon cycle, but there is not enough of it to stop the rapid pace of global climate change. That will require aggressively cutting greenhouse gas emissions and creating technologies that can remove carbon from the atmosphere at a large scale over the next few decades.

Climate models consistently show that nature will not save us. We have to save ourselves – although rocks may provide us with a bit more cushion than we previously knew.