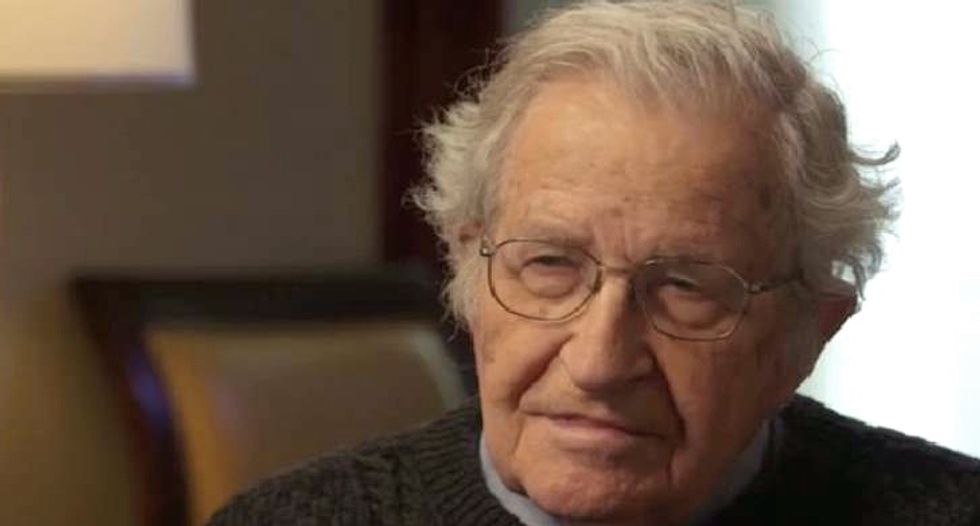 Noam Chomsky is an exceptionally influential figure. Author of well over 100 books (as well as many articles, letters, speeches and interviews) published over the past 60 years, Chomsky is integral to cognitive science, modern linguistics, philosophy, mass media criticism and political analysis -- especially of US foreign policy, the military-industrial complex, capitalism and imperialism. Chomsky is a defender of free speech and is one of the most cited authors.

This interview first appeared at Truthout.com.

Dan Brook: Worker-owned cooperatives (co-ops) seem to be a hybrid between capitalism and socialism. Other such hybrids could include consumer-owned co-ops, nonprofit organizations/non-governmental organizations (NGOs) and even state-owned institutions.

Noam Chomsky: Not just co-ops, but also worker-owned, and sometimes, worker-managed enterprises. These I think are very important developments, which could be the germs of a very different society. Sometimes they reach considerable scale, like the Mondragon conglomerate in the Basque country. There's important literature on all of this, particularly Gar Alperovitz's recent work.

NGOs and state-owned institutions are a different matter.

Classification of enterprises as "capitalist" or "socialist" (or hybrids) has no clear meaning because the terms are so imprecise and often used so loosely. So, take the world's largest corporation, Apple. It began producing marketable computers in the late '70s, adapting the results of creative work mostly in the dynamic state sector of the economy for decades -- and that continues -- say, the technology in the iPhone. So, is it "capitalist"?

Trump is both cause and consequence of so many horrible things going on in the US. People create conditions, while conditions create people. What's your view on human agency and leadership?

I don't think much can be said at a very general level. There's all sorts of variation and complexity.

Despite all the fraud, voter suppression, corporate mass media biases, political party duopoly, plutocracy, etc., votes are still mostly counted in this very imperfect, top-down democracy. Yet, only a little more than half the electorate, and a little less than half of millennials, voted in 2016. If millennials had voted in greater numbers in the primaries, Bernie Sanders would likely have been elected president. If they had done so in November, Trump wouldn't have become president. Although we shouldn't fetishize voting, I think we shouldn't fetishize non-voting either.

There's an excellent study of these matters by two outstanding political scientists, Walter Dean Burnham and Thomas Ferguson. They focus in detail on the 2014 election, but the conclusions are general. As they point out, participation is reducing to the level of the days when voting was restricted to white males with property qualifications. The reasons are not hard to figure out. People don't have to read the academic work in political science (these authors, Gilens, Bartels, Page) to know that the large majority are essentially unrepresented, in that their opinions and choices are ignored by their own representatives, who, like others, listen to the voices of the ultra-rich and corporate sector, overwhelmingly. So why bother?

The Sanders campaign, the most remarkable feature of the '16 election by far, broke with the long-standing pattern of reliance on wealth and corporate power. He might well have won the nomination, maybe the election, had it not been for the machinations of the Obama-Clinton "New Democrat" party managers. But without a mass popular and activist-engaged base, Sanders couldn't have done anything even if he had been elected. There's lots more to say about this.

As a linguist and a political analyst, what role do you see for language in the political sphere and how can progressives be more effective communicators and organizers?

Linguistics tells us nothing. Common sense does.

The production and consumption of meat is exploitative and destructive on all levels. It is one of the most dangerous jobs for humans (largely immigrants in the US), destructive of the environment and a leading cause of deforestation and global climate change. Meat also involves the killing, torturing and the otherwise hyper-exploitation of animals (mostly female) on a massive scale. For those of us who care about social and environmental justice, how can we approach this vital issue?

At several levels. First, by opposing industrial meat production. Then by moving on to changing food policies over a broad range -- which will include many other factors, like the destructive effects of industrial agricultural production, overfishing, and much more.

You've described yourself as an anarcho-syndicalist. Can you say what that means to you and what model best represents that ideology for you?

Can only refer you to what I've written about the matter. There are several collections: by Carlos Otero, Barry Pateman, some others.

The Occupy Movement challenged the political and economic injustices of a system in which the top 1 percent disproportionately have power and wealth. There are various reasons why it largely failed. Could some version of Black Lives Matter, #MeToo, Fight for 15, or Never Again be more successful?

Did it fail? Occupy is a tactic, not a movement. It succeeded in placing crucial issues on the agenda, radical inequality for one. There were efforts to create a real continuing movement, moving into neighborhood organizing and so on. Some were successful, some have taken other forms (like the offshoots of the Sanders campaign). The same holds for the movements you mention. There are prospects, but it takes hard and continuing work.

It's too easy to simply be pessimistic, cynical, angry or apathetic about our political economic system, and I think this benefits the ruling elites. What inspires you and gives you hope?

The fact that people like you -- and there are many -- are concerned and (I hope) committed.

Note: This interview has been lightly edited for clarity.