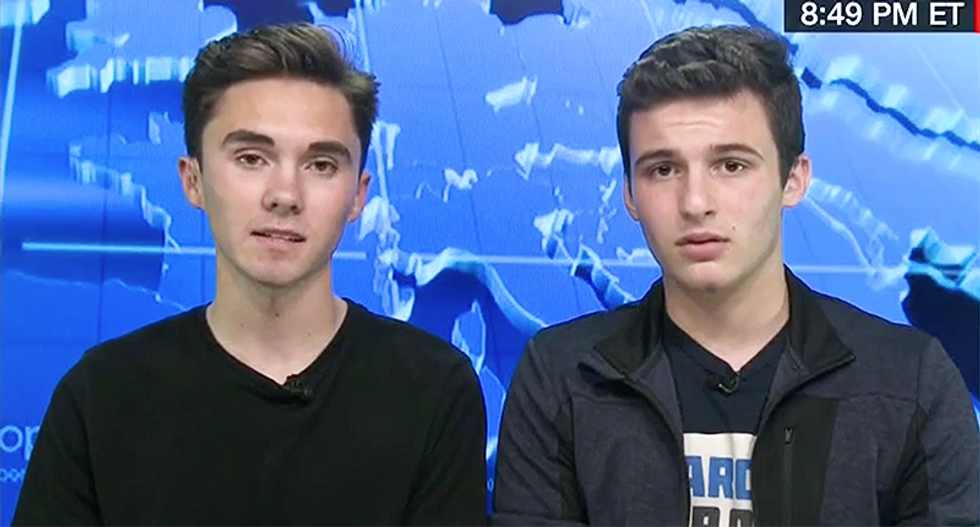 In a Friday interview with CNN's Anderson Cooper, Parkland, Florida students David Hogg and Cameron Kasky said that the National Rifle Association seems to be scared if today's speeches are any indication.

"The NRA is scared," tweeted David Hogg Friday. "That's why they brought out the President and the VP for the first time to their convention." He went on to call Trump's speech a visit to the Death Star.

Kasky brought up the shady corporations that were set up for the NRA that allowed them to accept funding from Russian donors that ultimately got funneled into the 2016 election into Trump.

"That is hopefully the first Russian-funded group he has met with," he said.

Kasky also brought up the meetings that seemed to cause Trump to shift his position.

"You know, he was saying some things that implied that he was stepping forward into the right direction for gun safety in this country and then he had a meeting with some NRA officials, a private meeting," he explained. "Afterwards he came and claimed that the Second Amendment was under siege and he was going to defend it. So, as to whether or not the NRA meeting changed his views, that's kind of up to speculation."

Hogg said that it proves where Trump's heart and his wallet really are.

The young men also cited the importance for voter registration and getting young voters to the polls in the 2018 midterm election. They cited the non-partisan group HeadCount, which partners with bands, festivals and clubs to register people standing in lines to get into concerts and at the venues.