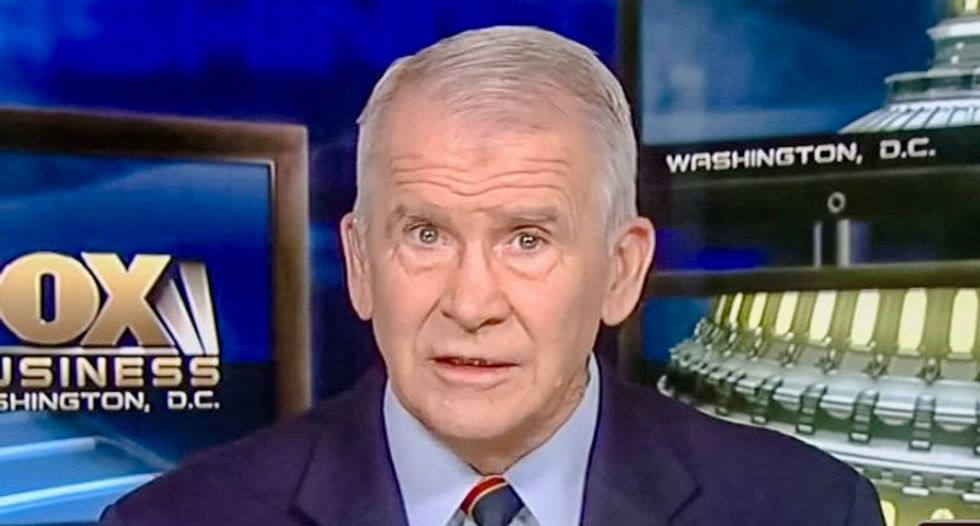 Oliver North has just set the tone in his new role as President of the NRA. He's painting the gun lobby group as a victim and gun control activists as terrorists. The retired USMC Lieutenant Colonel and former Fox News pundit is tossing in a bit of racism to boot.

"Mr. North said the NRA is now the victim of 'civil terrorism' after vandals splashed fake blood on the Virginia home of a top NRA official and other opponents aimed personal 'threats' at NRA leaders and members," The Washington Times reports after interviewing North.

“They call them activists. That’s what they’re calling themselves. They’re not activists — this is civil terrorism. This is the kind of thing that’s never been seen against a civil rights organization in America,” he said.

(Update: In his 1989 Iran-Contra trial prosecutors labeled North the "Joe Isuzu of government," calling him chronic liar who refuses to accept any responsibility.)

“They can do all the cyberwar against us — they’re doing it. They can use the media against us — they are. They’ve gone after our bank accounts, our finances, our donors, and obviously individual members,” North said. “It’s got to stop. And that’s why the leadership invited me to become the next president of the NRA.”

“What they did very successfully with a frontal assault, and now intimidation and harassment and lawbreaking, is they confused the American people,” he said. “Our job is to get the straight story out about what happened there, and to make sure that kind of thing doesn’t happen again because the proper things are being done with the advocacy of the NRA.”

It's unclear who he's accusing of illegal activity.

North says his first goal is to add one million more members to the NRA's ranks. he says there are 100 million Americans who own guns, and the NRA has, he claims, a record number of members that is approaching 6 million.