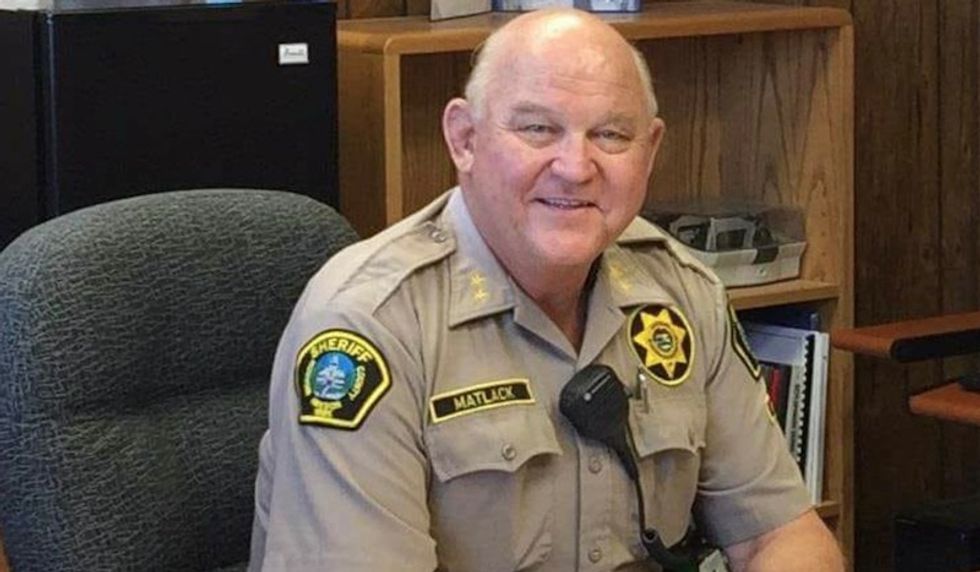 A sheriff in rural Oregon has reacted angrily to a proposed statewide ban on assault rifles. A ban on owning weapons that have fixed magazine holding more than 10 rounds of ammunition appears headed for the November ballot, as a referendum drive is currently gathering signatures. The state votes by mail and has elected only one Republican to statewide office in the last generation.

Eastern Oregon, where the Bundy standoff happened, is much more conservative.

Sheriff Ken Matlack, the top lawman in lightly populated Morrow County, has come out hard against the proposed ban. Matlack is an extremist conservative and rabid anti-immigrant activist who has aligned himself with Maricopa County Sheriff Joe Arpaio.

As first reported by Raw Story, over the weekend Matlack posted a rant to Facebook comparing it to "Nazi Germany," and "Stalin’s Russia."

Instead of the rule prohibiting people from owning high-capacity assault rifles, Matlack suggests being less like those totalitarian regimes by punishing people who have an inkling that "something bad" is going to happen but fail to report it to authorities.

"With many of our mass shootings, it has been learned that there were people who knew or felt something bad was going to happen," he wrote. "To know and not report should be criminal. Everyone should be a mandatory reporter when it comes to public safety. This would make such a difference in protecting each other and our families. Our firearms play a strong role in keeping us safe. Don’t make it more difficult."

Matlack, who has an education degree from the local college, also wrote that the ban is "likely unconstitutional" despite the fact that other jurisdictions have similar laws which have been upheld by courts.

"I fully support law abiding citizens who want to protect themselves and their families with firearms," Matlack wrote. "I support any qualified citizen who wishes to have a concealed handgun license. I do not fear armed honest law-abiding citizens; I fear criminals who do not obey the law and will not comply with more new gun laws."

Morrow County has very little crime, however, in October, one of Matlack's deputies shot a man in the head after the deputy creeped up on a man who was sleeping in a truck and the startled man poked his head out with a gun in his hand.

Matlack's post has been shared more than 500 times, including by guns rights activists.

There is little debate on the post because the sheriff's staff is removing critical comments from the government-sponsored page's post about "Stalin's Russia."