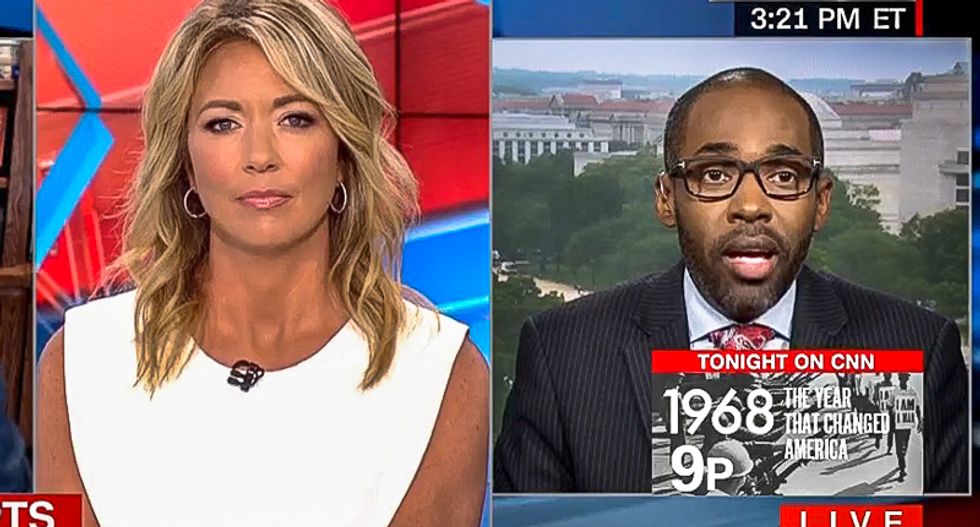 Republican strategist Paris Dennard on Monday suggested that soldiers had died to give President Donald Trump the right to praise himself on Twitter.

In a tweet on Monday, Trump marked Memorial Day morning by asserting that dead soldiers would be proud of his presidential accomplishments.

We can never truly repay the debt we owe our fallen heroes. But we can remember them, honor their sacrifice, and af… https://t.co/iHLhFdhoZQ
— Barack Obama (@Barack Obama) 1527523321.0

Dennard later told CNN's Brooke Baldwin that "the soldiers who fought, bled and died did so for the freedoms of America."

"They did so so we can have the opportunity to live in a free enterprise system, where we do have a strong economy," he continued. "They did so so that we would live under American rule and law and not under rule of communism or socialism or under the Islamic state."

"And so because of their sacrifices and because of people who serve right now, fighting for us and protecting us, we have had the freedoms and free enterprise system and capitalist system that allows us to have an amazing economy," Dennard said. "So the president's remarks via Twitter and his remarks there at Arlington were heartfelt and were appropriate."

Baldwin pressed Dennard over Trump's decision to tweet about "this spy conspiracy and Russia before going to Arlington and laying that wreath."

"Why go there, today of all days?" Baldwin asked.

"The president is able to tweet and talk about multiple things," Dennard insisted. "I think the president has a right -- we all have freedom of speech, which is one of those things that those soldiers protect us for the Constitution -- for us to be able to tweet and speak how we want to freely."