Pat McCrory failed at being a governor. Now he's succeeding at being a racist 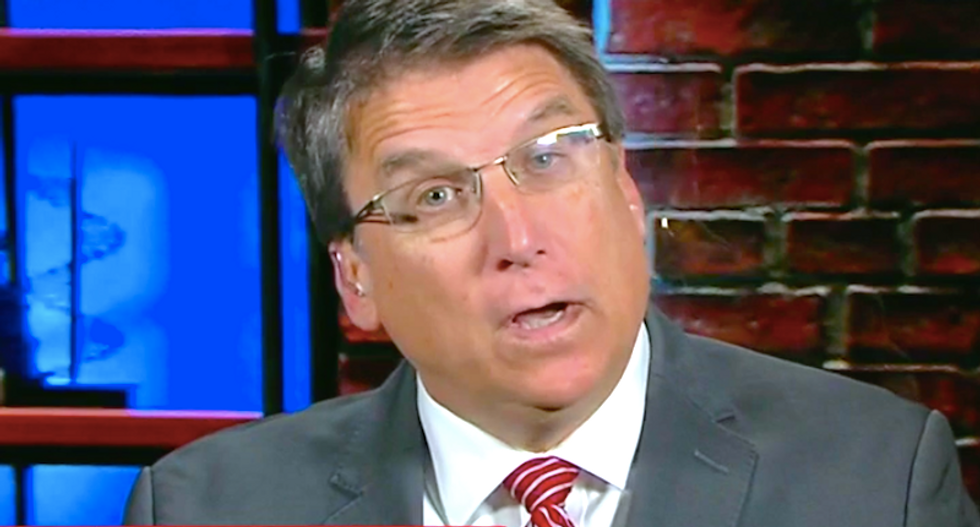 Former North Carolina GOP governor Pat McCrory lost re-election after putting the tar-heel state – and the nation – through years of anti-LGBT strife and discrimination. His support of the so-called "bathroom bill" that led Republican lawmakers to enact dictatorially punishing legislation stripping away civil rights from not only transgender people but many North Carolina citizens was beyond the pale. As his state lost millions in revenue he lost voters' confidence, and ultimately, their votes and his job.

Now McCrory is doing what washed up politicians do best: political commentary.

On his radio show (audio below) Wednesday McCrory revealed he is not just anti-LGBT, he's also anti-Black.

McCrory, mayor of Charlotte for 14 years before becoming a one-term governor, shared with his listeners how very uncomfortable and disturbed he is that Black people are getting elected in his North Carolina home town.

"We've become a very segregated political system in Charlotte-Mecklenburg (county)," McCrory began, complaining that Democrats control the city, "unlike the diversity that we had in the political system ten years ago."

Make no mistake, McCrory is saying "Democrats" but he means Black people. And he's calling Black people getting elected to city offices a "tremendous change in dynamics," and one he isn't happy about it.

"The Black Political Caucus has total control over the Democratic Party," in Charlotte, McCrory claims.

"Because in the primaries the demographics is that the African American vote dominates the Democratic primary. So therefore if all elections in Charlotte-Mecklenburg are determined by the Democratic primary, all primaries are then determined by the Black Political Caucus. A small group of individuals who hand out flyers at the polling places like McCrorey YMCA," the former governor railed. "And that determines the election for all of Charlotte-Mecklenburg."

"And they totally abandoned the white male Democratic sheriff," McCrory continued, carving out for himself the role of grieving white male.

WBTV explains that McCrory's "analysis comes one day after Spencer Merriweather was elected to District Attorney and Garry McFadden won the sheriff’s race. It is the first time two African Americans have been elected to those offices in Mecklenburg County."

But that's just too much for Pat McCrory.

Meanwhile the former school board chair, Arthur Griffin, who heads up the Black caucus, tells WBTV, ”I think it's a political dog whistle to say, 'let’s engage in this racial politics thing,' when in fact the evidence is absolutely clear that the Black Political Caucus engaged in public policy that's good for all citizens."

When those positions were held by white people was McCrory complaining about a lack of diversity?