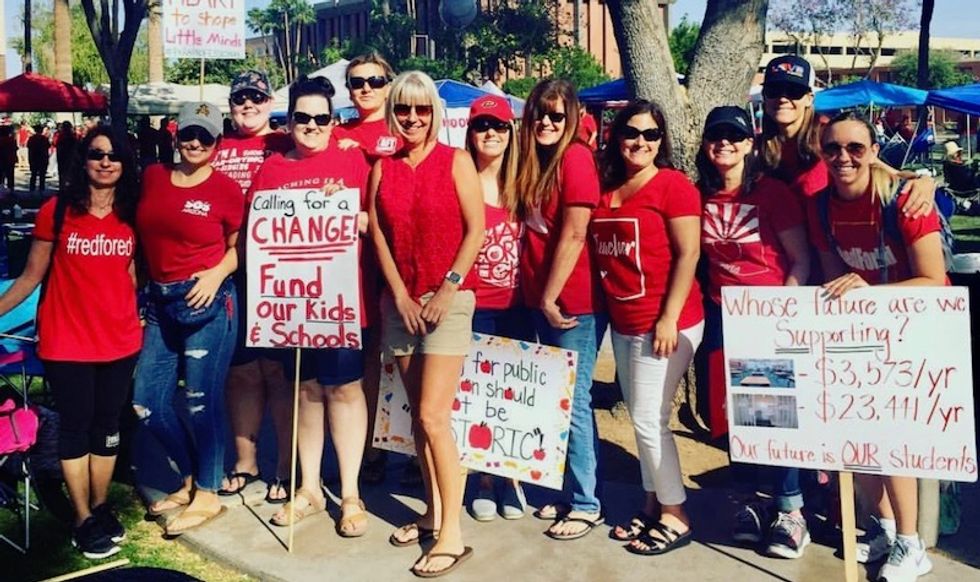 Jasper Nichols registered the name "Arizona Educators United" in a state database, declared himself president of the non-profit and then threatened to sue a print shop that was making shirts for striking teachers at-cost.

After the shop switched designs, Nichols called the shop to harass them, alleging that the shirts were part of an out-of-state conspiracy.

"We want to see where the money’s coming from to print the shirts," Nichols told the shop owner in a recording of the phone call given to Phoenix New Times. "I know where the whole thing is going and the purpose of it—which I don’t want to discuss, but I don’t like it."

On a Facebook profile registered to Jasper Nichols, he took a page out of the Kentucky governor's playbook and said that children would suffer because of the strike. He also admitted to "sh*tposting" on the organization's Facebook page, making jokes about teachers being members of the Bloods street gang.

"What’s the over under for how many kids die because they are not being supervised at school tomorrow? I will bet it will be under privileged children with parents who can’t take time off work," he wrote. "No one deserves to go hungry so teachers can strike about a raise they are already getting. I’m betting 2 kids die and I’ll even call it in the northwest valley. They will be martyrs for a movement no one will remember in two years."

Along with that comment, the Jasper profile made racist jokes about being in the "ghetto" where a gang of "Bloods" had moved in.

In the video , the male narrator is joined by what sounds like the voice of a child.

"No, we're in the ghetto—it appears a gang has moved in," he said. "I think they're called the bloods. Daddy knew a guy from the hood, it's definitely the bloods."

The shirts are being printed again.

New Times points out that registering trademarks or trade names with the Arizona Secretary of State does not grant exclusive rights and that the troll would need to get "Arizona Educators United" registered with the U.S. Patent and Trademark Office.