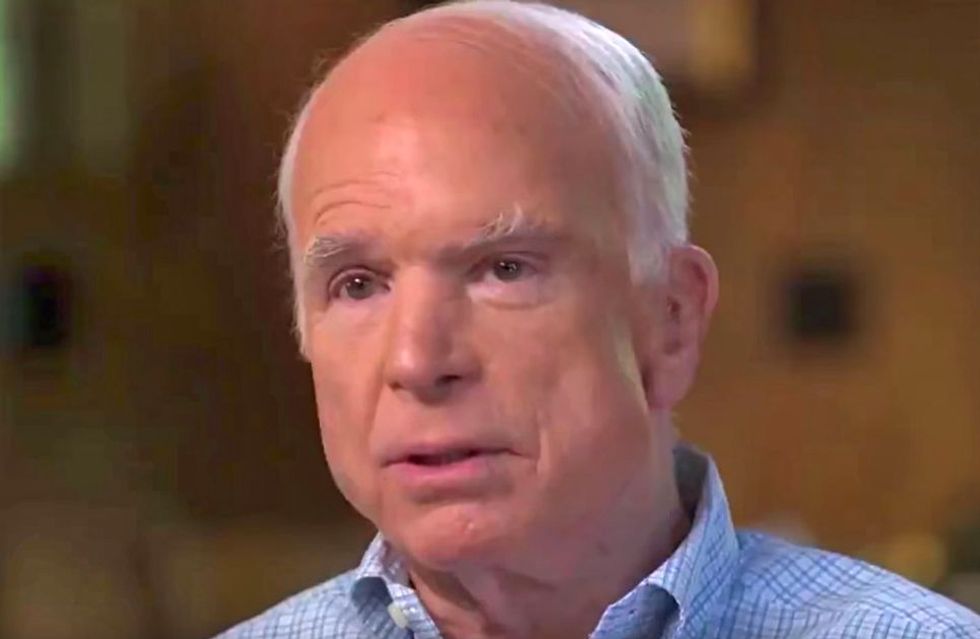 John McCain is reportedly very close to succumbing to brain cancer at age 81.

The Arizona senator has not been in Washington all year, instead staying at his ranch in the Arizona mountains. He's been talking about his joys and regrets, and also preparing for the release of an autobiography called The Restless Wave: Good Times, Just Causes, Great Fights, and Other Appreciations—which may make some waves given his scorching takedown of Donald Trump.

The Arizona Republic, the McCain-friendly newspaper in Phoenix, has an advance copy of the book. Trump is slammed, the paper reports. McCain says Trump gives "the appearance of toughness or a reality show facsimile of toughness seems to matter more than any of our values."

"His lack of empathy for refugees, innocent, persecuted, desperate men, women, and children, is disturbing," McCain writes. "The way he speaks about them is appalling, as if welfare or terrorism were the only purposes they could have in coming to our country."

McCain has long sparred with Trump, and in his final book, McCain tries to strike the tone of a statesman as he praises the free press and compares Trump to a tyrant.

"His reaction to unflattering news stories, calling them 'fake news,' whether they're credible or not, is copied by autocrats who want to discredit and control a free press," McCain writes. "He has declined to distinguish the actions of our government from the crimes of despotic ones. He has showered with praise some of the world's worst tyrants."