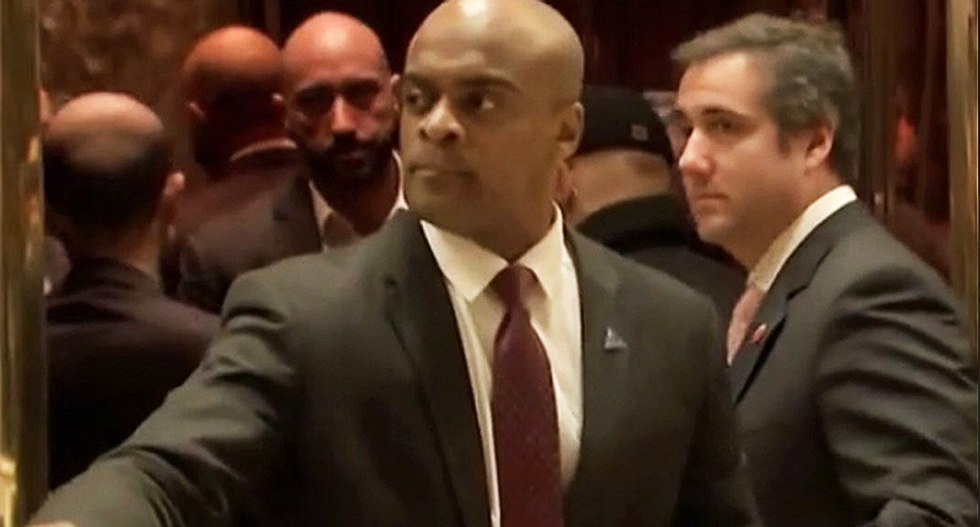 Cohen has been warning Avenatti on a series of issues as the two legal men battle in public on cable news and social media. The latest warning came from Cohen, saying that Daniels' former attorney shouldn't forward Daniels "eyes only" hush agreement with Trump to anyone, including Avenatti.

Sunday, Avenatti tweeted that he's ignoring any warnings from Cohen and Trump to tamp down his attacks against the two men. He then included the photos of the men walking into Trump Tower.

And to be clear - by “warning ignored” I am referring to the refusal of various parties to come clean and the failu… https://t.co/1MTcJkHEYg
— Michael Avenatti (@Michael Avenatti) 1526240538.0

Mother Jones has since identified the men in the tweet as a group from Qatar, including Ahmed al-Rumaihi. In late 2016 and 2017, al-Rumaihi worked to try and build relationships with those inside the newly elected administration. Al-Rumaihi, a former diplomat, currently heads a division under Qatar's sovereign wealth fund. In a recent lawsuit, they were accused of attempting to bribe officials in the Trump administration, though an associate at a firm representing a defendant called it a "defamation suit."

In an even more bizarre twist, last week, rapper and actor Ice Cube filed a $1.2 billion lawsuit along with his business partner Jeff Kwatinetz claiming Qatari officials as well as Al-Rumaihi attempted to use funds in a basketball league to score access to Trump officials, including Steve Bannon.

“Mr Al-Rumaihi requested I set up a meeting between him, the Qatari government, and Stephen Bannon, and to tell Steve Bannon that Qatar would underwrite all of his political efforts in return for his support,” said Kwatinetz, according to court filings Mother Jones cited.

The news of the men's identities come mere hours after MSNBC commentator and military analyst Malcolm Nance outlined how Trump could be charged with "bribery" under Section 4 of Article Two of the United States Constitution.

The provision outlines that the “President Vice President and all civil Officers of the United States, shall be removed from Office on Impeachment for, and Conviction of, Treason, Bribery, or other high Crimes and Misdemeanors.”

"Why was Ahmed Al-Rumaihi meeting with Michael Cohen and Michael Flynn in December 2016 and why did Mr. Al-Rumaihi later brag about bribing administration officials according to a sworn declaration filed in court?" Avenatti asked later on Twitter.

First China and now Qatar. Meanwhile, Trump's cabinet officials are being caught using their positions to spend taxpayer dollars to support their own lavish lifestyles.

Avenatti gave timestamps of the video watching who was coming in and out of Trump Tower during the transition on C-SPAN:

The brief and completely immaterial mention of Mr. Kwatinetz and the suit prompted a staffer of a "Strategic Communications Counsel" to contact Raw Story to say that the single sentence cited in the court case above "contributes to the dissemination of false information promoted by Jeff Kwatinetz in the context of ongoing commercial litigation involving the largest investor in the BIG3 basketball league."

A statement instructed to be attributed to "a Sport Trinity spokesperson" was demanded, saying, “Simply put, the statements in Mr. Kwatinetz’s declaration are pure Hollywood fiction. Mr. Kwatinetz is engaging in a xenophobic PR smear campaign against Sport Trinity, the largest investor in BIG3 basketball, to cover up his own mismanagement and erratic behavior with respect to the league. Mr. Kwatinetz’s commercial dispute with Sport Trinity is meritless.” Along with a press release link.