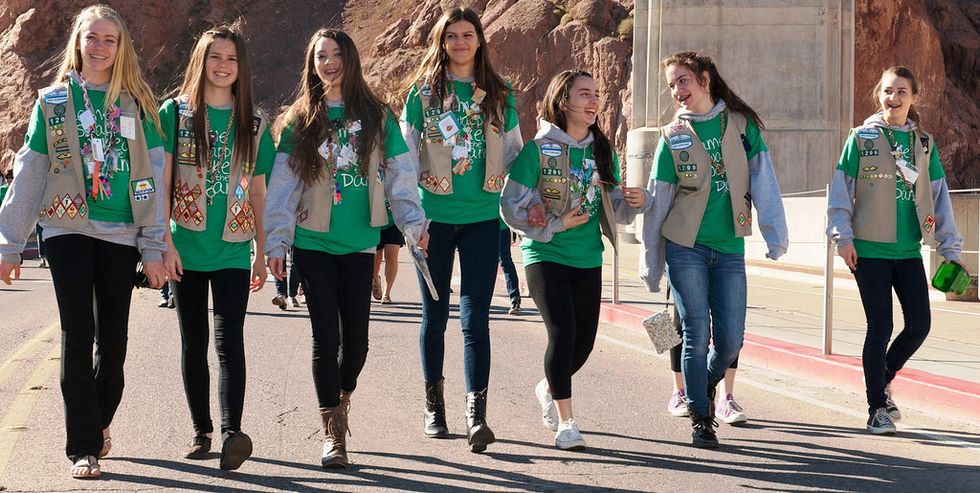 Girl Scouts/Courtesy of Bureau of Reclamation

Last week, the Boy Scouts of America — which has quietly expanded its programs to include girls, starting with Cub Scouts — announced that the name of its principal scouting program will be changed to Scouts BSA and girls will be allowed to join on an equal footing. While many families interested in scouting welcomed the idea, the announcement caused a complete meltdown in some corners of conservative America, especially the religious right. This is not a huge surprise.

"How is it not cultural appropriation for women to say, by the way, we’re now going into Boy Scouts?" asked right-wing pundit Steven Crowder, in what he no doubt believed was a successful "gotcha." "That’s a part of male culture and you’re appropriating it."

This story originally appeared in Salon.

The Daily Wire's Matt Walsh went on Fox News and accused the Boy Scouts of "bending to the whims of the P.C. leftist mob," adding that "this iconic American organization" has "now destroyed itself."

"I could understand [it] if we didn't have Girl Scouts," said "Fox & Friends" co-host Ainsley Earhardt, responding to Walsh. "But if you're a girl and you want to be part of the scouts, then you join the Girl Scouts."

The problem with that argument, however, is that just a few short years ago, the same right-wing media was encouraging parents not to let girls into Girl Scouts, using highly tenuous arguments that the group was somehow subversive and hyper-sexualized.

Bill O'Reilly's attacks on the Girl Scouts go back to at least 2004. He has attacked the group for citing pro-choice female politicians as role models, claimed that a Scout leader had "homosexual overtones," and he pushed the idea that the Girl Scouts somehow promoted abortion.

Starnes, before he objected to girls joining the organization formerly known as the Boy Scouts, encouraged parents to take girls out of Girl Scouts, claiming that the group was somehow about "indoctrination" and demanding a boycott of Girl Scout cookies claiming, falsely, that "Girl Scout money was helping to fund Planned Parenthood."

“They see the Girl Scouts as a feminist thing, and feminism is a dirty word for the religious right," said Peter Montgomery, a senior fellow at People for the American Way. "I think maybe they’re suspicious of teaching girls leadership without having it in the conservative Christian context, which means leadership subject to biblical roles for women."

Conservatives have had anxieties about the Girl Scouts for decades now, but hostilities kicked into overdrive in 2010, after a group of teenage Girl Scouts participated in the UN Commission on the Status of Women. At the same conference there was a panel that discussed sex education -- but which did not involve the Girl Scouts in any way. But the fact that Girl Scouts and discussion of human sexuality were in the same building at the same time was discovered and, through the magic of the right-wing grapevine, converted into accusations that the Girl Scouts were partnering with Planned Parenthood to promote "promiscuity."

These facts have done little to stop the tide of hysteria. Every cookie-selling season renews right-wing accusations that Girl Scouts is "pushing promiscuous sex on the girls," cultivating “an attitude of suspicion toward males in general" or teaching that "abortion and sex-ed and promiscuity for very young girls is a good thing."

This right-wing rumor mill has grown to the point where the first term that came up when I typed "girl scouts" into the Google search engine was "girl scouts planned parenthood" That came up before links to information about cookie sales or local Girl Scout groups.

Conservative media, Montgomery said, benefits from stoking “fears that the left is coming after your children somehow," noting that religious-right types have long said that "gay and lesbian people were coming for your children" and now have moved on to making parents afraid that there's some kind of sinister intent behind utterly benign institutions like the Girl Scouts.“We’re seeing the same war being waged against the Boy Scouts, now that they are taking what the right sees as a more progressive stance," he added.

A couple of explicit religious-right groups have been founded to poach kids from mainstream Scouting programs and direct them into alternatives that serve up a heavy dose of proselytizing and conservative politics alongside lessons in building or and sewing buttons.

In 1995, in response to policy changes in Girl Scouts that opened the group's scouting programs to non-religious folks and LGBT youth and adults, Ohio resident Patti Garibay started American Heritage Girls, with the express goal of guiding "precious girls" so that they could "grow up into women of integrity who loved God." The group emphasizes that it only allows "biological girls," and while there is no explicit religious discrimination, the expectation that girls should "live according to the standards of the AHG Oath and the AHG Creed" effectively restricts membership to Christians. The group also explicitly dictates the private sexual morals of members — "We are to reserve sexual activity to the sanctity of marriage" — while Girl Scouts takes no position on such matters.

Similarly, Trail Life was founded in 2013, in response to the Boy Scouts of America's incremental decisions to accept gay adults and youth into its programs. The group is aggressively exclusionist, admitting only members who "accept the basic tenets of Trinitarian Christian doctrine," which would excludes not just Jews, Muslims and members of other non-Christian faiths, but also Mormons and Jehovah's Witnesses.

The irony here is noteworthy. The right wing accusations against both the Girl and Boy Scouts are that they are indoctrinating children. But these alternative groups founded in response to the shifting mores of scouting are far more focused on indoctrination than the mainstream organizations, which are largely silent on matters like personal sexual morality or religious belief. The Girl Scouts have no faith restrictions and the Boy Scouts accept all faiths, though the group is still uncomfortable with atheism.

Membership of both Trail Life and American Heritage Girls is small, compared to the millions of participants in both Boy and Girl Scouts. In the wake of the Boy Scouts' recent decision to admit girls, however, Trail Life started hustling for new enrollees.

"With the Boy Scouts of America (BSA) having completely lost their way in the woods of co-ed political correctness, many parents believe that someone else needs to provide a compass for young men’s masculine journey," Trail Life said in a press release sent after the Boy Scouts' announcement. "Trail Life USA CEO Mark Hancock, former advertising executive turned professional counselor, is available for interview and guest appearances. Also an award-winning writer and speaker, he has raised the alarm about the latest rounds in what he calls the ongoing 'war on boyhood' that threatens society."

The same email somewhat randomly denounced a "new counseling program at the University of Texas at Austin offering 'a healthy model of masculinity'" as part of a "culture producing unproductive narcissists." The program in question encouraged men to view behaviors like supporting women's equality, rejecting homophobia or allowing yourself to cry as compatible with masculinity.

Ultimately, this conflict may be unresolvable. Both Boy and Girl Scouts have seen declining numbers in recent years. As Montgomery notes, conservatives may see these recent changes as a "surrender to this secular, humanist, feminist culture," but they are also adaptations by groups who recognize the need to modernize and market themselves effectively. Conservatives may flail against that fact, but the scouting organizations clearly realize that they must keep up with larger changes in society or collapse into irrelevance.