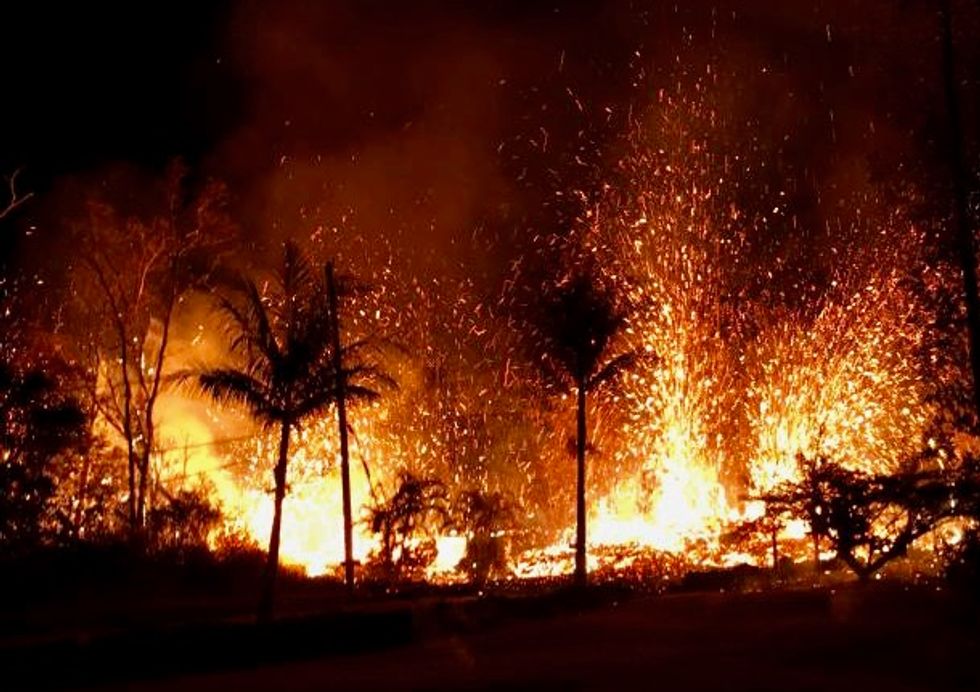 A new fissure spraying lava fountains as high as about 230 feet (70 m), according to United States Geological Survey, is shown from Luana Street in Leilani Estates subdivision on Kilauea Volcano's lower East Rift Zone in Hawaii, U.S., May 5, 2018. US Geological Survey/Handout via REUTERS

The eruption of Hawaii’s Kilauea volcano could intensify in the coming weeks, possibly spraying pebble-sized projectiles miles around and dusting nearby towns with ash, the U.S. Geological Survey said on Wednesday.

Kilauea, the U.S. state’s most active volcano, erupted on Thursday, and lava flows from fissures on its eastern flank have destroyed at least 36 homes and other buildings and caused the evacuation of about 2,000 residents.

Explosive eruptions could kick off if the lava lake in Kilauea’s crater falls to the level of groundwater, causing an influx of water to create steam-driven explosions, the USGS said.

“The steady lowering of the lava lake in ‘Overlook crater’ within Halemaʻumaʻu at the summit of Kilauea volcano has raised the potential for explosive eruptions in the coming weeks,” the USGS said in a statement.

Hawaii County authorities reported at 7 a.m. Wednesday (1 p.m. ET/1700 GMT) that growth of the new vents had paused but that they continued to emit hazardous sulfur dioxide. Exposure to very high levels of the gas, which causes acid rain, can be life-threatening, according to the Agency for Toxic Substances and Disease Registry.

Emergency teams donned gas masks and went door-to-door evacuating residents who returned to the Laipuna Gardens neighborhood east of Kilauea after the initial eruption to care for homes, pets and livestock.

Evacuee David Nail was anxious to learn if his house had been destroyed in the neighboring Leilani Estates area. He was asleep on the couch in his home when a fissure opened up 2,000 feet (610 meters) away, spewing out lava and gas.

“It sounded like 10 or 20 jet engines,” said Nail, 57, who had recently retired to the area from Orange County, California.

Nail said he had seen drone footage showing lava flowing up his driveway, causing two propane tanks to explode. The blast left his house standing, but Nail said he did not know if it had been gutted by fire.

He tried to reach his house on Tuesday, but he and neighbors were stopped by a 20-foot (6-meter) tall pile of lava.

“All we could do was sit there and cry,” he said.

Fourteen fissures have opened since Kilauea started spraying fountains of lava up to 300 feet (90 meters) from the vents.

About 104 acres (42 hectares) of land have been covered with lava since Thursday.

Kilauea has been in a state of nearly constant eruption since 1983.