Is Rod Rosenstein playing Trump to buy time for Mueller and the FBI to do their jobs? 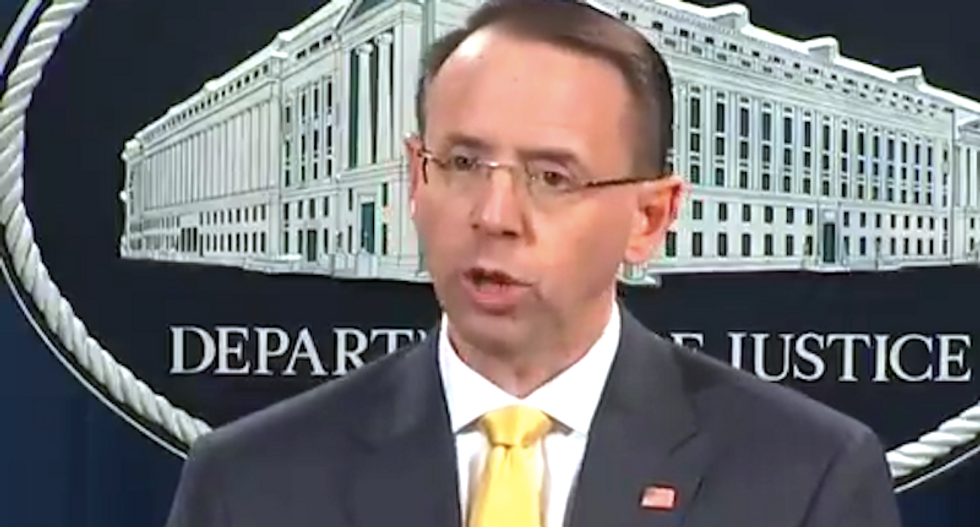 Deputy Attorney General Rod Rosenstein this week agreed to ask the Department of Justice inspector general to look into whether the Trump campaign was improperly surveilled by the FBI during the 2016 presidential election.

While Rosenstein's move has been criticized as a dangerous cave to President Donald Trump, a Washington Post report raises the possibility that Rosenstein is only doing the bare minimum to keep his job to buy time for investigators to get their jobs done.

Specifically, the Post says that Rosenstein's concession "could be a bureaucratic maneuver to buy time and shield actual documents," and it notes that the Department of Justice has frequently clashed with Rep. Devin Nunes (R-CA) over the release of key documents in the probe.

"Earlier this month, the department temporarily defused a similar standoff with House Intelligence Committee Chairman Devin Nunes, who is seeking internal records and FBI reports on the source and threatened to hold Attorney General Jeff Sessions in contempt," the publication writes. "The department had Nunes over for a classified briefing but provided no documents, and Nunes decided not to attend a later briefing the department offered."

In an interview with Slate's Isaac Chotiner, attorney Jack Goldsmith argues that Rosenstein is doing the best he can under a bad set of circumstances.