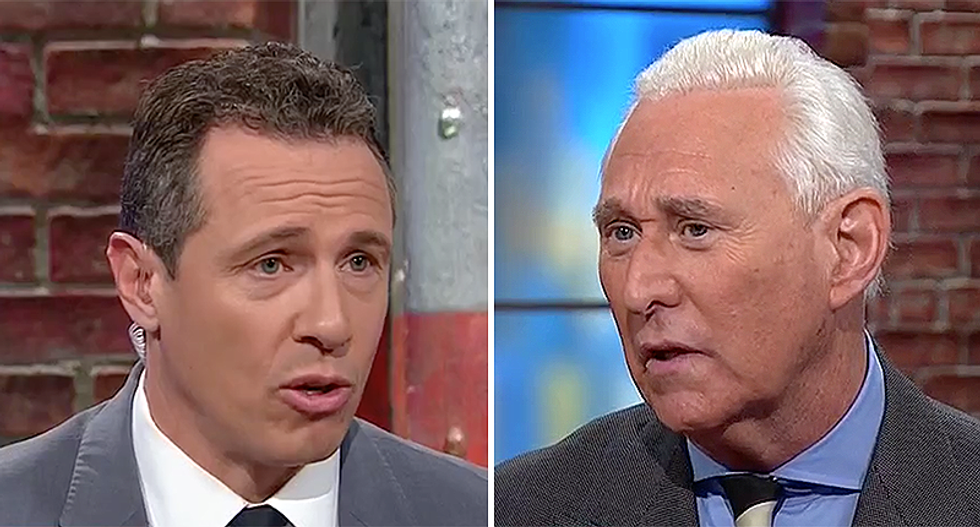 President Donald Trump’s longtime pal Roger Stone spent the morning whining that his First Amendment rights are under attack because YouTube and other sites are blocking ads to promote his new book.

In a CNN interview with Chris Cuomo, Stone attempted to argue that free market corporations don't have a right to deny his ads or videos. Ironically, this argument comes as the U.S. Supreme Court is hearing a case where a bakery can deny making a wedding cake for a LGBT couple.

Still, Stone argued that he has a right to say whatever he wants and have those words and commentary promoted by those corporations.

"It's one thing for a consultant to give that kind of advice," Cuomo said. "You were sought by left and right alike to figure out how to deal with the sticky mess. Is that the right way for a president to act? When you're asked legitimate question, attack the media. You say in one of your rules the media is not your enemy. To deny everything. Never admit a lie. Never clean anything up."

Stone claimed that the president was under the most vicious "fake news assault" of all time.

Stone then attacked MSNBC reporter Ari Melber, who said that Stone worked with Gates. "No, I didn't. He never worked there. That's fake news."

"Well, first of all, he can speak for himself, he is a talented attorney. but Ari's point could be wrong, right? You could be wrong and it's not a deception and a lie," Cuomo explained to Stone.

Stone tried to claim that it was a "smear," thus it means that everyone is out to get him and he tried to argue that all claims are false.

When it came to his book, that's when Stone claimed he was the victim of censorship.

"What's interesting to me, when I post the link to buy this book on Google, within hours they call it spam," Stone claimed. "When I post an ad to buy at Amazon, Barnes & Noble, they call it -- they reject the ad. This kind of internet censorship is very very dangerous."

Cuomo wondered who the "they" were in his conspiracy theory.

Stone explained it was "the left" or the "tech left."

"I do a show, as you do, five days a week. It's a lot of work. I can't get it loaded on YouTube because it's controversial," Stone claimed.

As a fact check, Stone's videos are displayed on YouTube, so it is unclear which videos were taken down. Typically things are only removed for violating terms of service.