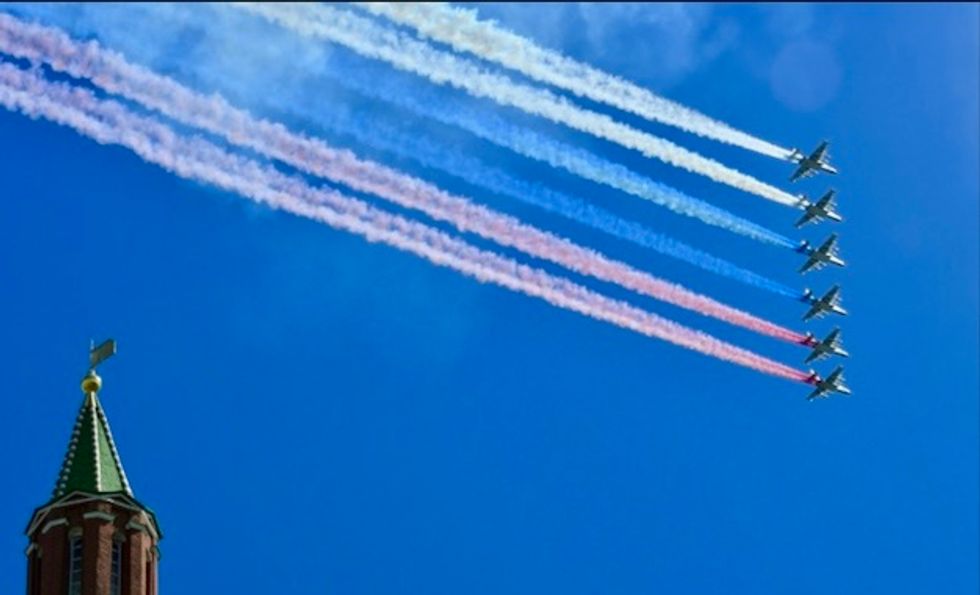 Russia rolled out its latest military hardware on Moscow's Red Square on Wednesday for the annual parade to mark Soviet victory over Nazi Germany as President Vladimir Putin begins his fourth Kremlin term.

"Our people fought to the death. Not one country faced such an invasion," Putin said in a speech as veterans and some 13,000 troops marched past in a perfectly choreographed military spectacle marking 73 years since victory in World War II.

Much of the new military equipment on display has been tested out in Syria, the defence ministry said. Altogether the parade featured 159 types of hardware including 75 aircraft.

For the first time, the parade included drones, which were wheeled across the square on trailers, as well as a de-mining robot used by the military in Syria's Palmyra and Aleppo and an unmanned tank. There was even a snowmobile to be used by Arctic units.

Putin presented the Kinzhal missile system in March during his state of nation address, saying it could "overcome all existing and, I think, prospective air and missile defence systems."

"This is a holiday which has always been, is now, and always will be sacred for every family," Putin said, greeting a watching crowd including veterans decked out in medals on a bright sunny morning.

Putin poured scorn on those, who he said, are trying to "rewrite history" and downplay the Soviet Union's role in overcoming the Nazis.

"Today people are trying to erase the feat of our people in saving Europe from slavery, from extinction, from the horrors of the Holocaust," Putin warned, saying they are trying to "forge, rewrite and misinterpret the events of the war."

He watched the parade alongside Israeli PM Benjamin Netanyahu, with whom he was set to hold a meeting later Wednesday, as well as Serbian President Aleksandar Vucic. The national leaders later took part in a ceremony with Putin at the Memorial to the Unknown Soldier by the Kremlin walls.

Referring directly to the current political situation, Putin warned against a repeat of World War II, saying that "behind new threats are the same ugly traits: egotism, intolerance, aggressive nationalism and claims to be unique."

"Russia is open to dialogue on all questions of ensuring global security" and is "ready for constructive, equal partnership," he said in a speech that concluded with shouts of "Hurrah!" from the assembled forces.

Marking one of the most heartfelt national holidays in Russia, thousands across the country were set to take part in marches through city centres holding up photographs of their relatives who fought in World War II, a new tradition that has taken root as the number of living veterans has dwindled.