Seth Meyers blasts Trump's claim of draining the swamp: 'He bottled it and sold it as Dr. Trump's Miracle Healing Elixir' 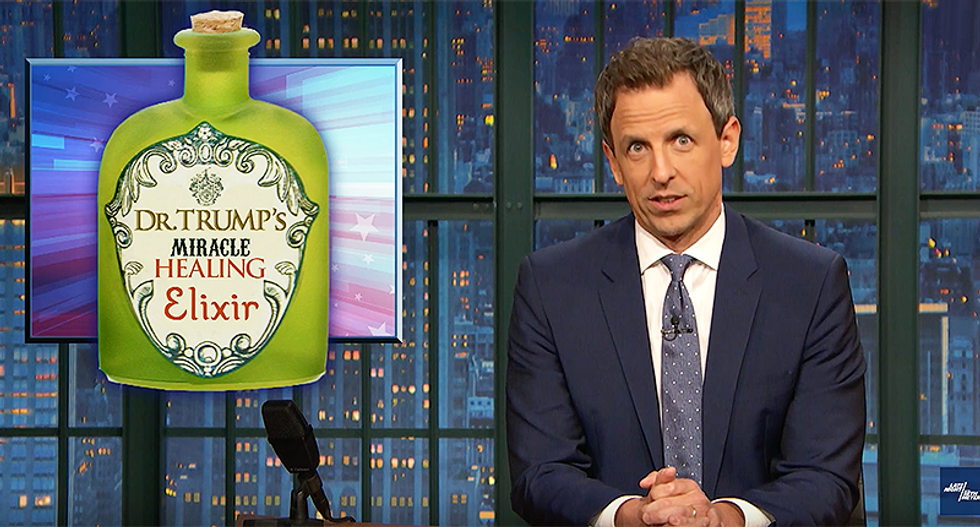 Comedian Seth Meyers began the week discussing President Donald Trump's complete and utter failure helping to get members of his own party elected.

The fail-rate is quickly climbing to challenge the president's own low job approval ratings and both could spell disaster for the GOP in the November Midterm Elections. Meyers played a clip of Trump's May 10 visit to Indiana promoting a Republican candidate running against "an incredible swamp person." He led the crowd in a chant of "drain the swamp," but that prompted Meyers to dive into the hypocrisy of what Trump's swamp looks like after merely 17 months of draining.

"I'm sorry, but after all your scandals, it is now devoid of all meaning," Meyers said. "You might as well chant 'We like Ike' or 'Brooklyn Dodgers!'"

He noted that the president's cabinet has had one corruption scandal after another. Last week, Americans learned his "personal fixer" was literally selling access to the president.

"Trump didn't drain the swamp, he bottled it and sold it as Dr. Trump's Miracle Healing Elixir," Meyers joked.