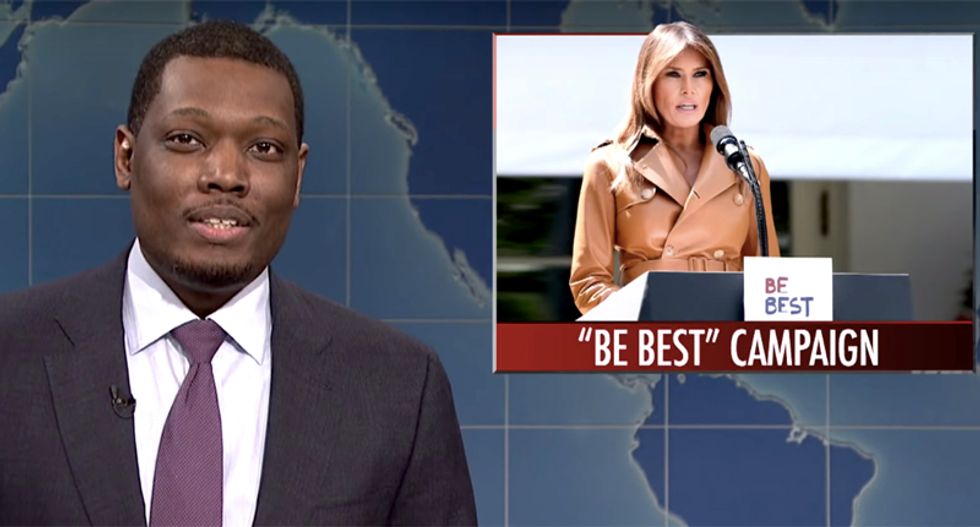 Saturday Night Live's Michael Che called attention to Melania Trump's anti-bullying social media campaign during his Weekend Update segment -- and gave her some handy advice if she wants to duck abuse herself.

Touching on a multitude of topics, the host noted that Trump has been quiet on Twitter as of late, saying, "Personally, I don’t like when Trump is this quiet. It’s like when I’m babysitting my nephew and he’s quiet for too long and I’m like, oh no, he’s eating out of that litterbox again.”

He went on to talk about Trump withdrawing from the previous administration's Iran deal, saying the president has made it his mission to make anything fashioned by former President Barack Obama cease to exist.

“President Trump announced  he would be withdrawing the U.S. from the Iran nuclear deal. And look, I’m not going to pretend I know anything about the Iran deal. But Trump is,” Che quipped. “And, you know, the only part of that deal Trump has read is the signature at the bottom that said ‘Barack Obama.’ That is all he needed; Trump has undone so much of Obama’s work that Obama’s gonna start fading away in pictures like Back to the Future.”

He then turned to the first lady and her highly publicized initiative with a sly suggestion.

“First Lady Melania Trump, or as I’ve been calling her, sexy-ass Michael Jackson, has launched a campaign to stop cyberbullying called ‘Be Best,'" he explained before pausing a beat and remarking, "As in, it would ‘be best’ if you got a divorce.”