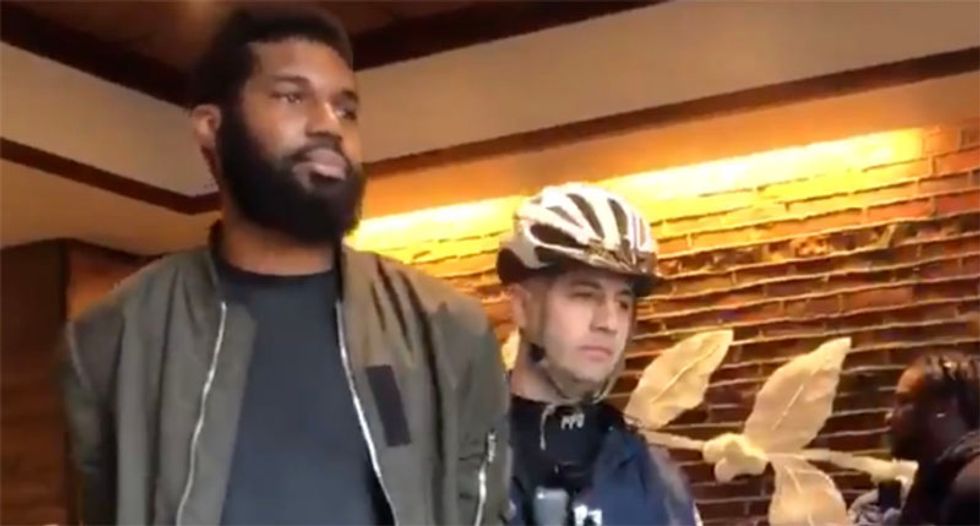 First, Starbucks came under fire after an April 12 incident in which two African-American men, Rashon Nelson and Donte Robinson, were arrested in a Starbucks in Philadelphia’s upscale Rittenhouse Square area; a manager had called the police, complaining that Nelson and Robinson (who were waiting for a business associate, Andrew Yaffee, to discuss a possible real estate opportunity were trespassing because they were occupying a table without making a purchase.

To make matters worse, Starbucks is now coming under fire in Southern California’s Latino community because of a recent incident in which a racial slur was allegedly written on a cup of coffee that a customer named Pedro had ordered in a store in La Cañada (another L.A. suburb). His friend Miguel Acosta told CBS News that Pedro was distressed because the word “beaner” had been written on his cup. Starbucks has launched an investigation into the incident, and Pedro was offered a $50 gift card by that La Cañada Starbucks.

Starbucks was quick to respond when the video of Nelson and Robinson’s arrest went viral and inspired angry protests. After apologizing to both men, Starbucks CEO Kevin Johnson announced that on May 29, 8000 company-owned Starbucks stores in the United States will be closed during the afternoon for anti-racial bias training — which is being developed with the input of Eric Holder (former attorney general under President Barack Obama’s administration), Sherrilyn Ifill (president of the NAACP Legal Defense and Education Fund) and others.

But while it is good that Johnson has been proactive in addressing racism, that doesn’t erase what Starbucks has come to symbolize in cities all over the world: gentrification and class privilege. More than any other brick-and-mortar chain—even Whole Foods—Starbucks is synonymous with expensive real estate, luxury condos, six-figure incomes and the displacement of working class people. And when Starbucks shows up in an area, it’s an ominous sign that gentrification is underway.

Anthea Butler, an associate professor of religion and Africana studies at the University of Pennsylvania in Philadelphia, has asserted that the arrest of Nelson and Robinson is not only symptomatic of institutional racism, but also, gentrification. Center City Philadelphia’s Rittenhouse Square area has been associated with the affluent and well-heeled since the early 19th century, but as Butler pointed out in an April 17 article for the Huffington Post, gentrification has made Center City on the whole—not just Rittenhouse Square—whiter and less affordable.

“In Center City,” Butler asserted, “the rapid influx of expensive stores and multistory apartment buildings and condominiums is turning what was once an ethnically diverse area into a retail and housing paradise for well-heeled young white families and retirees.”

In 2015, Eater.com used U.S. Census Bureau data to conduct a study on the type of areas that Starbucks typically serves—and contributor Vince Dixon reported that “83 percent of Starbucks stores in the U.S. serve predominately white areas, mostly wealthy or middle class ones” and that “if there’s a Starbucks in the neighborhood, there is more than likely a substantial white population and a median income higher than $50,000.”

Describing Starbucks relationship with the Windy City, Dixon noted, “Almost all Chicago Starbucks stores are on the city’s North Side, the wealthier, more diverse counterpart of the largely African-American, mixed-income South Side. The few locations that exist on the South Side are in higher income neighborhoods like Hyde Park, the stomping grounds of University of Chicago students and the first family.”

Baltimore-based journalist D. Watkins, a vehement critic of gentrification, has noted the role that Starbucks plays in displacing African-Americans in gentrifying areas. In 2015, Watkins described Baltimore as a “place where yuppie interests make black neighborhoods shrink like washed sweaters, a place where black history is bulldozed and replaced with Starbucks, Chipotles and dog parks.”

The opening of a Starbucks, according to Watkins, is a warning sign of what he calls “pre-gentrification,” meaning that developers are preparing an area for severe gentrification and that long-time residents can look forward to being priced out.

Spencer Rascoff, CEO of online real estate database the Zillow Group, and Zillow’s chief economist Stan Humphries, have observed the connection between Starbucks and gentrification, explaining that from 1997-2014, home prices in the U.S. appreciated by 65% on average but appreciated by 96% if they were near a Starbucks. This trend has been called “the Starbucks effect.”

In 2017, Toronto-based real estate investor Pierre Carapetian urged realtors and developers to “monitor the Starbucks effect,” explaining, “Starbucks has a certain knack for locating new shops in areas that are showing signs of residential growth and development. As gentrification occurs, other trendy restaurants and boutiques geared towards middle-class tastes shoulder their way in to set up shop, which then causes real estate prices to soar in formerly undesirable neighborhoods.”

Gentrification is also a sore subject in Europe, where anti-gentrification protests have been occurring in cities ranging from London to Barcelona. Housing in London, amazingly, is even pricier than New York City, according to the Global Property Guide. And the more hyper-gentrified London becomes, the more prevalent Starbucks becomes: Quartz.com estimated that in 2014, Starbucks had more than 200 stores in London, making it the most Starbucks-saturated city in Europe.

Meanwhile, in Latin America, Starbucks has made considerable headway in Mexico, where it had opened 600 stores as of March 2017. Mexico is very much a country of haves and have-nots, and in Mexico City, it’s no coincidence that Starbucks is easy to find in Polanco, Condesa and other bastions of privilege and affluence.

One area in which Starbucks clearly excels is public relations. Whether the chain is donating coffee trees to farmers in Mexico or closing stores for an afternoon of racial sensitivity training in the U.S., Starbucks likes to paint itself as a business with a strong social conscience. But all the coffee trees in the world can’t erase the amount of gentrification and social cleansing that Starbucks has been so quick to promote.