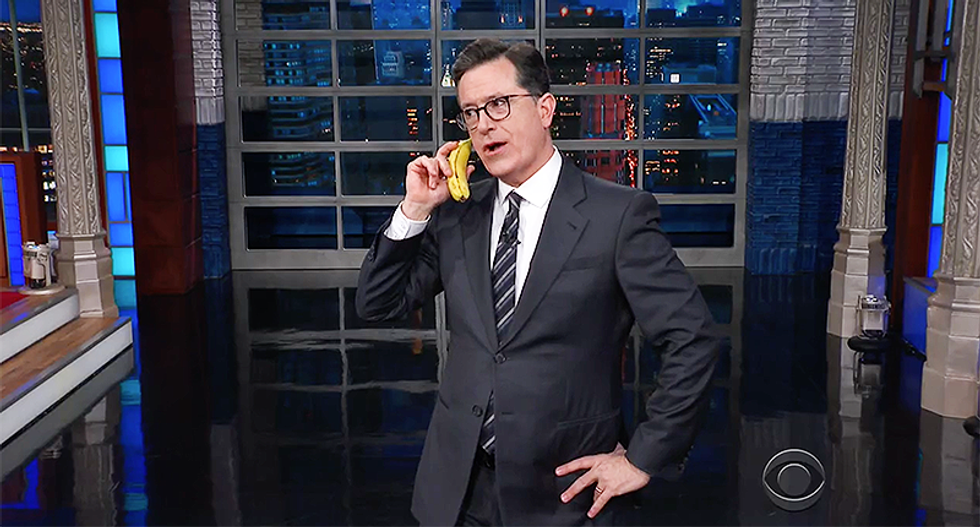 If President Donald Trump and his team can invent alternative facts, then so can "Late Show" host Stephen Colbert.

During his Monday evening opening monologue, the host mocked a recent story that Trump allegedly made up a phone call on the set of Saturday Night Live claiming that his book had just scored big on the New York Times best seller list.

"Now, I talk a lot about how the president has become a delusional ego maniac who lives in the reality of his own making," Cobert confessed. "But, that's not fair. Trump was that way before he was president. Case in point, this interview with SNL's Pete Davidson. He's talking about what it was like when Trump hosted the show back in 2015."

Davidson described Trump as weird, specifically noting he "faked a phone call during the table read. Right as we started he like, he was like uhhhh-- 'Hello!' he goes, 'Oh, fantastic. OK, great!' And then he hung up and he goes 'Hey everybody, my book just went number one!' And we were all like, 'Yo, that phone didn't ring.'"

"They were tipped off when Trump answered on his finger-phone," Colbert joked. "Can't talk. Obama tapped this hand. Call me on my other one. 'Hello? OK, tell me how great my book is doing.' Not only was this rando phone call apparently faked, but the book he's referring to, Crippled America, never made it to number one on the bestseller list. It was like Moscow. Trump just sat there while someone else went number one. Damn you, Satan!"

"So, the president lied in a phone call that he lied about getting. what a pointless, pathetic way to boost your own --" Colbert then stopped, hearing a phone call. Pulling out a banana, Colbert put it to his ear. "Yes, hello, President Trump who is actually calling me right now? What's that? I'm doing a tremendous job and you agree with all the things I'm saying about you? How nice. Sorry, got to go, my potassium's low."

Colbert also noted that the Trump White House is going to war to rid its staff of leakers, a fact that was leaked to the New York Times.

"Here's the thing -- during the campaign, Trump aides were afraid that whatever they said to [Trump] would end up in the press and, behind his back, they called him 'leaker-in-chief,'" the comedian recalled. "Fight it, Colbert, fight it. It's not worth it."

But he went there: "More like 'leaker-on-sheets!' Damn you, Satan!" Colbert joked, hearkening back to the ongoing mockery that Trump allegedly hired Russian prostitutes to urinate on a bed once slept in by Barack Obama.