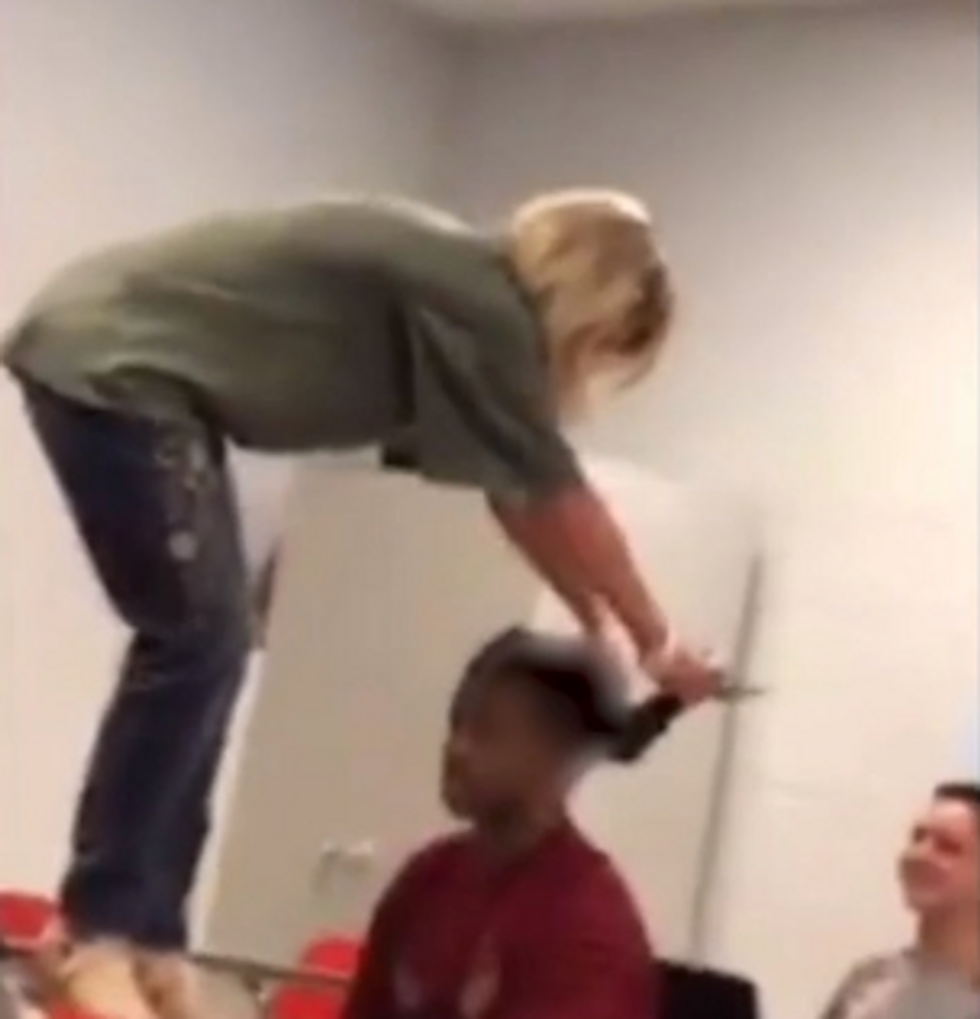 Lisa Houston pulling on a students hair (screengrab from video)

A South Carolina teacher has resigned after a video went viral of her stepping on a student's desk and tugging on his dreadlocks, according to The State.

Lisa Houston is a veteran teacher at Palmetto High School.  A video surfaced on social media showing Houston stepping on a black student's desk and pulling on his hair. Houston said she was just trying to wake the student up.

"If you ask any kid, I've taught, they'll tell you I kid around with them, make them stay awake and laugh with them," Houston said. "I know the video looks bad. If you don't know the situation, you don't know what's going on, but it was not a malicious act. It was all in fun. I want the public to know that I love the student, and that our rapport with each other was great. I would have never done anything to hurt him."

The racial perception of the video forced Houston to step down despite the support from her students and colleagues.

"The district wishes, our community to know that the school administration immediately conducted an inquiry into what occurred. The individual has already separated as an Anderson 1 teacher. Although the district is unable to comment in detail about the matter, the administration took seriously, what occurred, and the teacher, who has had an exemplary record of teaching performance, decided of her own accord that she would retire in the best interest of her school."

Even though the school district said the Houston willingly resigned, Houston's attorney, Ryan Beasley, said that she was forced.

"She resigned, but I'd say it was more of a forced resignation," Beasley said.

On Friday students protested and created a social media campaign to get Houston's job back.

This is Lisa Houston, she has taught at Palmetto High School for years and has received nothing but praise from cur… https://t.co/1pkPkn9M3J
— Benton Blount (@Benton Blount)1525366109.0

So much love and respect for the students of my school today. Our voices will be heard. Mrs Houston deserves better… https://t.co/JA5ePG8aNH
— Brooke Darby (@Brooke Darby)1525385417.0

The family of the student said they are not pressing any charges against Houston and wish the entire situation would just blow over. "I wish it would go away and that it never happened," he said.