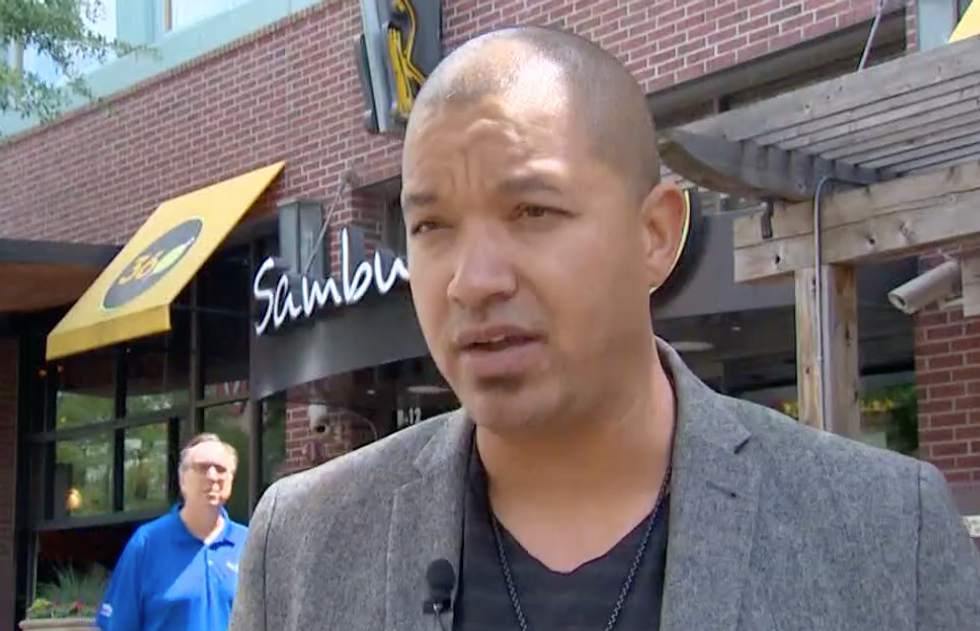 Johnny Wimbrey out out to eat (screengrab from video)

Successful motivational speaker, Johnny Wimbrey, was out having dinner with his wife when he experienced racial discrimination in Texas, according WFAA News.

While at Sambuca 360, Wimbrey said the manager asked him to move tables and he politely declined.

"I said, 'No I think we want to sit here. We have a great view. It's only a table for two.' We declined the offer respectfully,” Wimbrey said.

Wimbrey claims that the manager wanted to give his seat to a white customer.

The altercation was also recorded on a cell phone. In the video viewers can hear the manager telling Wimbrey to leave, and accusing him of trespassing.

"You can pay the tab. You are leaving,” said the Sambuca manager.

“Why am I leaving? ” Wimbrey said.

“What did I do wrong?” asked Wimbrey.

“I tell you to leave right now or I will call the police,” responded the manager.

“What did I do wrong?” asked Wimbrey.

“You need to leave now. What you are doing wrong is trespassing,” the manager said.

After the interaction the manager decided to call the police. It was at this point that Wimbrey decided to leave because the situation wasn't worth his life.

"The Plano police show up. They jump out of the car and I thought what would happen if I didn't leave?” Wimbrey said.

In a statement, a spokesperson for Sambuca 360 apologized: "We apologize for the miscommunication with our guest on Saturday night, which resulted from a mix-up at our host stand. Sambuca has no tolerance for discrimination and always wants to make every guest feel welcome and respected."