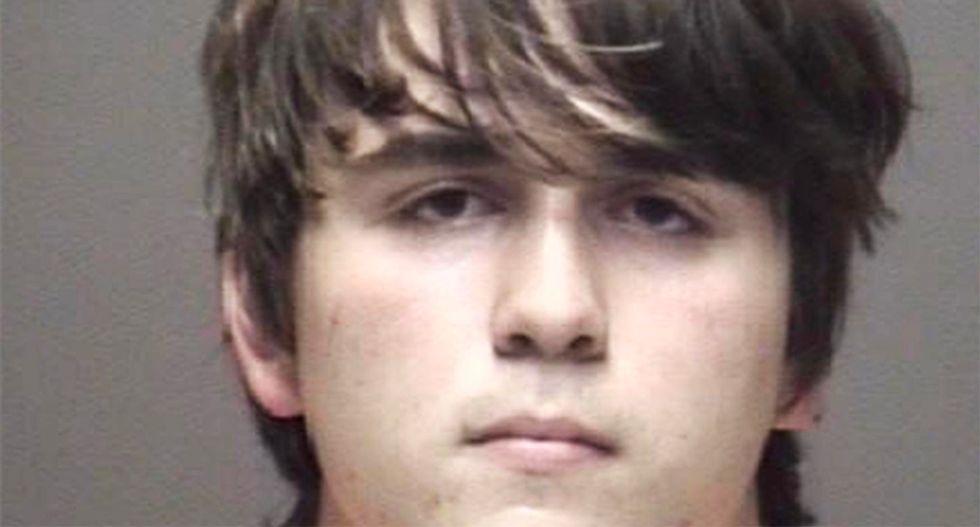 The 17-year-old student charged with killing 10 people when he opened fire in an art class at his Houston-area high school appeared “weirdly nonemotional” on the morning after the rampage, one of his lawyers said on Saturday.

The teenager, identified by law enforcement as Dimitrios Pagourtzis, has been charged with capital murder and is being held without bail in Santa Fe, Texas, where authorities said he went on a shooting spree shortly before 8 a.m. CDT on Friday.

For graphic on the timeline of major mass shootings in the United States since 2007 click tmsnrt.rs/2LfKug6

Nicholas Poehl, one of two lawyers hired by the suspect’s parents to represent him, told Reuters he had spent a total of one hour with Pagourtzis on Friday night and Saturday morning.

As the shooting unfolded, Pagourtzis spared people he liked so he could have his side of the story told, a charging document showed.

While authorities have given no indication why he apparently targeted the art class, a mother of one of the victims told the Los Angeles Times that her daughter, Shana Fisher, 16, had rejected four months of aggressive advances from Pagourtzis.

Fisher finally stood up to him and embarrassed him in class, the newspaper quoted her mother Sadie Rodriguez as writing in a private message to the Times.

Rodriguez did not say how she knew her daughter was the first victim, according to the newspaper.

Pagourtzis’ family said in a statement they were “saddened and dismayed” by the shooting and “as shocked as anyone else” by the events. They said they are cooperating with authorities.

“While we remain mostly in the dark about the specifics of (Friday’s) tragedy, what we have learned from media reports seems incompatible with the boy we love,” the family said.

Investigators had seen a photo of a T-shirt that read “Born to Kill” on the suspect’s Facebook page and authorities were examining his journal, Texas Governor Greg Abbott told reporters, but there were no outward signs he had been planning an attack.

Pagourtzis waived his right to remain silent and made a statement to authorities admitting to the shooting, according to an affidavit ahead of his arrest.

Asked if Pagourtzis had provided authorities with information about the shootings, Poehl said: “Honestly because of his emotional state, I don’t have a lot on that.”

Santa Fe High School, southeast of Houston, became the scene of the fourth-deadliest mass shooting at a U.S. public school in modern history, joining a long list of campuses where students and faculty have fallen victim to gunfire.

Students and faculty, bussed on to campus in small groups, were allowed to enter the high school on Saturday to retrieve belongings, though investigators closed off part of the grounds. Police kept reporters about 100 yards (91 meters) away.

All schools in the Santa Fe school district will remain closed on Monday and Tuesday, officials said.

In a letter to parents dated Friday but posted on the district’s website on Saturday, Superintendent Leigh Wall said eight of the dead were students and two were teachers. Authorities had earlier said that nine students and one teacher were killed.

National Football League star J.J. Watt, who plays defensive end for the Houston Texans, said he will pay for the funerals of the deceased, local media reported.

“Absolutely horrific,” he tweeted about the shooting.

‘QUIET LONER’ IN A TRENCH COAT

Classmates at the school of some 1,460 students described Pagourtzis as a quiet loner who played on the football team. On Friday, they said he wore a trench coat to school on a day when temperatures topped 90 degrees Fahrenheit (32 degrees Celsius).

Texas’ governor told reporters that Pagourtzis obtained firearms from his father, who had likely acquired them legally, and also left behind explosive devices.

Abbott said Pagourtzis wanted to commit suicide, citing the suspect’s journals, but did not have the courage to do so.

Some aspects of the shooting had echoes of the massacre at Columbine High School in Colorado in 1999. The two teenaged killers in that incident wore trench coats, used shotguns and planted improvised explosives, killing 10 before committing suicide themselves.

It was the second mass shooting in Texas in less than seven months. A man armed with an assault rifle shot dead 26 people during Sunday prayers at a rural church last November.