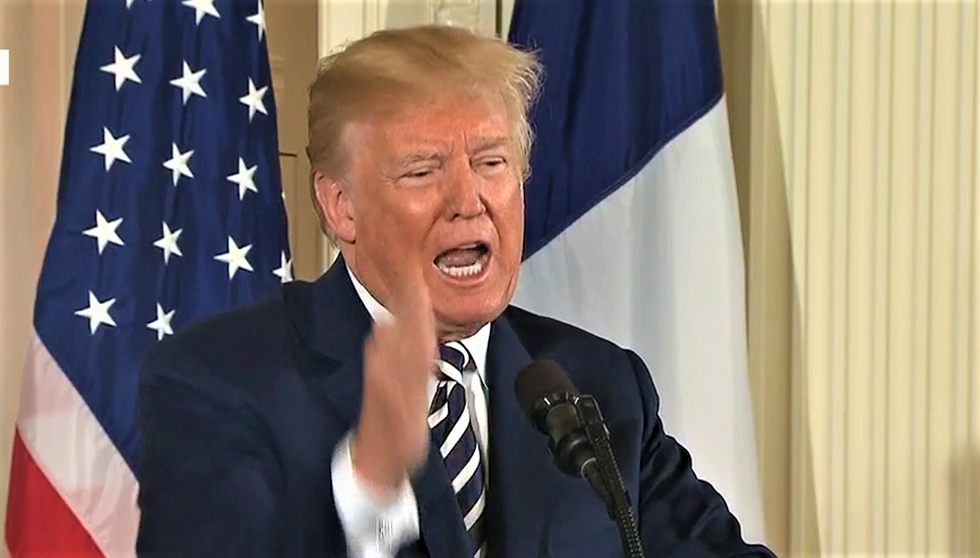 Here comes the next act in the Theater of Desperation that Washington has made of American foreign policy. Unless President Trump changes his ever-changing mind, the administration will abandon the accord governing Iran’s nuclear programs next weekend, assuming the White House holds to its schedule. Congress will then be authorized to reimpose the sanctions that had been in place before the agreement went into effect in early 2016.

This is stupid enough. If you ever wonder how a decaying empire behaves and do not feel like plowing through Gibbons’ history of Rome’s decline and fall, the next little while is your moment. Erratically, you will find. Irrationally. Desperately in its fury to preserve the primacy that cannot be preserved.

But pitiful is to follow stupid, erratic, irrational and desperate.

Washington had five partners in the 2013–15 negotiations with Iran: Britain, France, Germany, China and Russia. It will betray all of them — as well as Iran, of course — when it walks out of the Joint Comprehensive Plan of Action, as the pact is formally known. The European powers on this list will then acquiesce to Trump’s wishes and begin to negotiate a new agreement with the Trump administration. This is pitiful. The French, British and German leadership should be ashamed of themselves for this display of cowardice and unhygienic dependence.

Let’s play “What is wrong with this picture?” I win. For one thing, Iran has no intention of entering into new talks so as to open the JCPOA for modification or replacement. Mohammad Javad Zarif made this rippingly plain in a statement distributed by video Thursday. “Let me make it absolutely clear once and for all,” Iran’s foreign minister said. “We will neither outsource our security, nor will we renegotiate or add on to a deal we have already implemented in good faith.” The usually composed Zarif seems in a state of controlled apoplexy, if there is such a thing, and I do not blame him.

Second point: The other signatories in the P5+1 group, China and Russia, have already announced they will stand foursquare behind the Iranians. Sound foreign ministries are usually going to leave room for negotiation as a matter of principle, but I do not see the Iranians, Chinese or Russians going anywhere near the preposterous terms Washington and the Europeans now seem intent on putting on paper. I will return to these terms shortly.

What are we watching here? There are a couple of executive summaries readers may find useful.

One, the Iran accord now takes shape as a confrontation between West and non–West. We are likely to see a lot of this in coming years, as half a millennium of Western preeminence draws to a close before our eyes. But the Iran accord could have been something special in precisely this respect — a model of global cooperation on which much more was to be built. The Iranians and Russians were very clear about their aspirations on this point. Now a pact once full of a certain kind of promise will mark another step in the consolidation of a non–Western bloc that has China, Russia and Iran as charter members. The gathering density of their ties seems to be a secret only in Washington.

Two, Washington is about to do what it often does when circumstances require it to enter into a diplomatic process: It negotiates, it signs an agreement, it commences complaining about things the agreement does not cover and then it abandons the agreement. You have seen this before, readers, although some may not be aware of it, for the press plays an especially pernicious role in this progression: By the time Washington abrogates its responsibilities, you have read all about why the other side cannot be trusted, why the other side is at fault and why the U.S. is the aggrieved party.

There must be many possible outcomes in these weird circumstances — weird because there is simply no logic to them. Maybe in history the Western powers have acted this irrationally, but I cannot think of such an occasion in my lifetime.