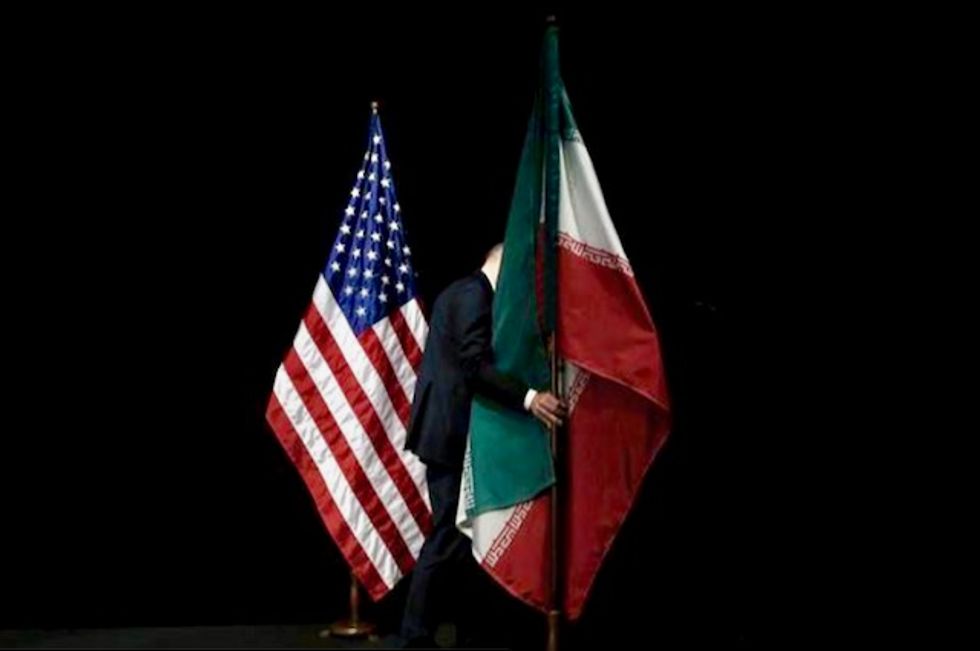 FILE PHOTO: A staff member removes the Iranian flag from the stage after a group picture with foreign ministers and representatives of the U.S., Iran, China, Russia, Britain, Germany, France and the European Union during the Iran nuclear talks at the Vienna International Center in Vienna, Austria July 14, 2015. REUTERS/Carlos Barria/File Photo

A day after U.S. President Donald Trump pulled out of the Iran nuclear deal, several families of American prisoners held in the Islamic Republic urged the White House to start humanitarian talks with Tehran to win their release.

The families made the appeal as U.S. Secretary of State Mike Pompeo was returning home on Wednesday with three Americans freed from imprisonment by North Korea, with whom Washington is hoping to pursue denuclearization talks.

Already tense relations between Washington and Tehran hit a new low with Trump extracting the United States from the 2015 international nuclear accord, making it unlikely either country would be in a mood to engage in any talks soon.

The White House did not immediately respond when asked by Reuters if the administration was open to holding talks with Iran on the prisoners.

The Trump administration has repeatedly demanded their release.

Two are dual Iranian-U.S. nationals 81-year-old Baquer Namazi and one of his sons, Siamak Namazi, 46, who were sentenced to 10 years in prison in October 2016 on charges of spying and collaborating with the United States.

“The situation of my family obviously has to remain as a separate humanitarian issue and it should be disconnected from all the difficulties that the two countries are facing,” said Babak Namazi of his father and brother after delivering that message to two senior administration officials at a White House meeting.

Babak and Jared Genser, a Namazi family attorney, said they urged the officials to open a private dialogue with Iran.

Wendy Sherman, who led the U.S. negotiating team in talks that culminated in the nuclear accord during the Obama administration, expressed concern that Trump’s “reckless action” likely means “that it will be even longer before Americans detained and missing in Iran come home.”

At least seven American citizens or permanent residents have been arrested in Iran since 2016, their lawyers or relatives have told media, of whom one has been freed on bail.

Kazem Gharibabadi, deputy head of Iran’s Council for Human Rights, part of the judiciary, has said more than 56 Iranians are imprisoned in the United States and an unspecified number in other countries.

Hua Qu said her imprisoned husband, U.S. citizen Xiyue Wang, had become a “political pawn and a victim of this deteriorating relationship.”

His case, she said, will hopefully receive more attention from U.S. officials, who previously raised it with their Iranian counterparts at quarterly meetings on the nuclear deal with little progress to show for it.

“To raise it once and wait for three months is too slow,” said Hua, speaking by telephone from her home in Princeton, New Jersey. Echoing Namazi and Genser, she said the administration should pursue a dialogue with Iran solely focused on prisoners.

“This is a humanitarian issue, and there should be a humanitarian solution. I don’t think putting this into a complicated political situation is the solution,” she said.

Xiyue Wang is a Princeton University graduate student who was sentenced to 10 years in prison on spying charges by an Iranian court in July 2017.

A married couple, Karan Vafadari, a U.S. citizen, and Afarin Neyssari, a U.S. permanent resident, were sentenced to 27 years and 16 years of imprisonment respectively, on charges which included espionage, according to the family.

“My brother is still in prison. He was/is never been political. I just hope they don’t use him as a political tool while the too countries are in bad terms,” Vafadari’s Washington-based sister Kateh told Reuters.

As of November 2017, Iran’s Revolutionary Guards had arrested at least 30 dual nationals during the past two years, mostly on spying charges, according to lawyers, diplomats and relatives.

The dual nationals include Nazanin Zaghari-Ratcliffe, a project manager with the Thomson Reuters Foundation, who was arrested in April 2016.

Zaghari-Ratcliffe, a British-Iranian, was convicted of plotting to overthrow Iran’s clerical establishment, a charge strongly denied by her family and the Foundation, a charity organization that is independent of Thomson Reuters and operates independently of Reuters News.