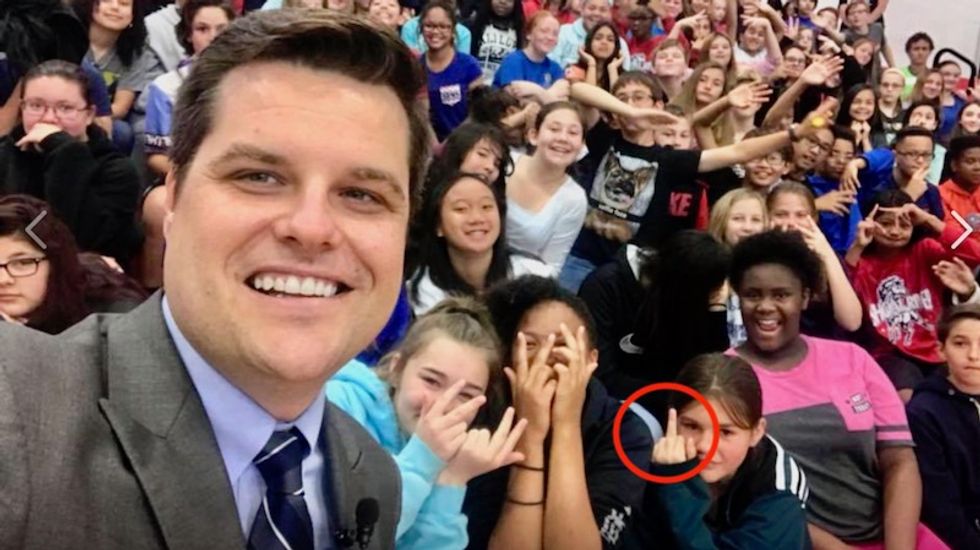 Florida Republican Matt Gaetz's visit to a local middle school has gone viral thanks to a selfie posted by the Trump-loving U.S. representative.

"Stopped in for a quick civics lesson at Shoal River Middle School," wrote Gaetz, in a Facebook post accompanying a selfie.

But in the photo a girl can clearly be seen flipping him off—Gaetz said that he did not noticed before posting it.

A woman who identified herself as the mother of the girl said she would be disciplined.

"As the mother of the little girl very disrespectfully flipping the 'bird', I will be dealing with her at home tonight! I absolutely have raised her better than this, and I promise this will NEVER happen again!" she wrote. "I have been dealing with her wanting to 'fit in' and I promise you, I am livid. Political views aside, this is completely unacceptable. Mr. Gaetz, I apologize on behalf of my daughter. I am very sorry this occurred."

Gaetz was gracious in response.

"Her congressman has also had an occasional lapse of judgement as a middle schooler," Gaetz wrote in response. "Teaching moments like this are a good thing. I had a lovely time with the students."