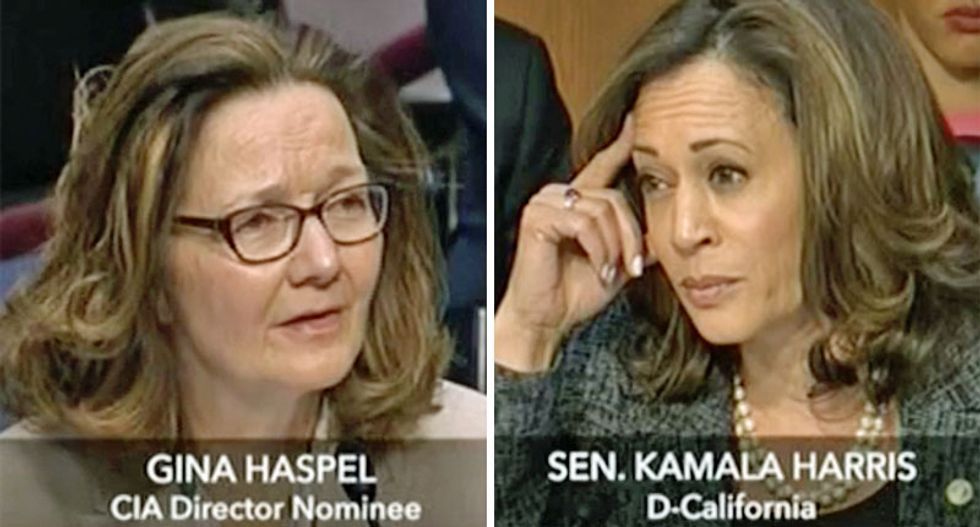 President Donald Trump's nominee to lead the Central Intelligence Agency was defiant during questioning by Sen. Kamala Harris (D-CA) at a Wednesday Senate Intelligence Committee hearing on the nomination.

Deputy Director of the CIA Gina Haspel, who has been the acting director since Mike Pompeo's confirmation as Secretary of State, repeatedly dodged "yes or no" questions from the former prosecutor.

Sen. Harris said the decision of confirmation would send "a signal to the men and women of the agency, to the American people, and to our neighbors around the world about our values as Americans on critical issues that range from our adherence to a rule of law to what we prioritize in terms of professional accountability and what we prioritize in terms of our moral authority as Americans and as a country."

Before her career in elected office, Sen. Harris managed the Career Criminal Unit in San Francisco's District Attorney's office. She was subsequently elected twice as both D.A. and California Attorney General.

Sen. Harris drilled down on the morality of torture, a line of questioning that had been pursued earlier in the hearing by Sen. Ron Wyden (D-OR) and Sen. Martin Heinrich (D-NM).

"So one question I have not heard you answer is, 'do you believe that the previous interrogation techniques were immoral?'" Harris asked. "It's a 'yes or no' answer."

"Senator, I believe that CIA did extraordinary work to prevent another attack on this country giving the legal tools we were authorized to use," Haspel replied.

"Please answer yes or no," Harris repeated. "Do you believe in hindsight that those techniques were immoral?"

"Senator, what I believe sitting here today is that I support the higher moral standard we have decided to hold ourselves to," Haspel continued.

"Can you please answer the question?" Harris requested.