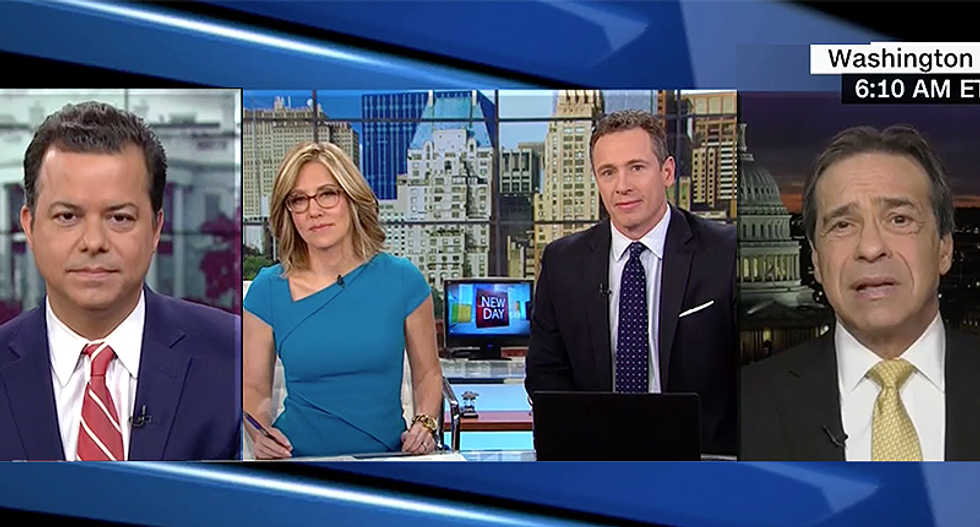 A Tuesday morning CNN panel couldn't help but mock President Donald Trump for spending four hours trying to prepare for impending litigation that might require him to be interviewed by special counsel Robert Mueller.

According to a Wall Street Journal report, Trump spent four hours trying to prepare for a possible interview by special counsel Robert Mueller.

"In an informal, four-hour practice session, Mr. Trump’s lawyers were only able to walk him through two questions, given the frequent interruptions on national-security matters along with Mr. Trump’s loquaciousness, one person familiar with the matter said," the WSJ said.

CNN host Alisyn Camerota wanted to know when the four-hour period was and how much tweeting was going on at the time.

"Only two questions. In other words, look, the way you interpret this, there's so much national security stuff happening the president can't possibly prepare for this sit-down," she said.

Daily Beast editor John Avlon disagreed, noting that other presidents in the past have managed to make it work.

"The president has pressing responsibilities for national security," he said. "It's tough to make that time. On the other hand, presidents have done it in the past. That particular tidbit is delicious and it seems like an outtake from within the loop. There's the absurdity and believability of high office -- two questions in four hours."

Chris Cuomo was more speculative, asking if people truly believe that Trump spent four hours studying for something he doesn't want to do.

"With regular breaks for presumably tweeting as well as national security," Avlon said. "Here is the point, first of all, he is totally loquacious, he is not focussed. Two questions derail him for large periods of time? Sure."

Michael Zeldin, former special assistant to Robert Mueller, explained that it makes sense in the context of attorneys working with their client to understand possible questions and ways to answer without digging into a deeper hole.

"So that they can help him make a final decision," Zeldin continued. "I'm not so sure that he's actually made a final decision. He has an instinct saying, 'I can talk my way through an interview with Mueller.' These practice sessions inform him whether that's true or not. That's smart for them to practice with him and say, 'What do you think?'"