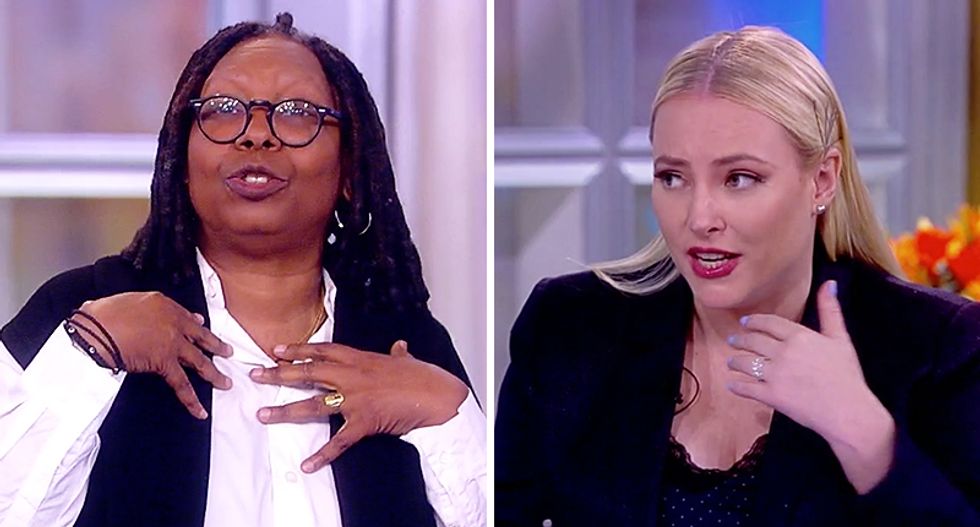 Frequent viewers of the ABC show "The View," know that conservative Meghan McCain frequently complains about the difficulty of being a Republican commentator on the show.

A discussion about the White House Correspondents Dinner Tuesday devolved into chaos when McCain began projecting assumptions onto her fellow panelists.

McCain argued that when she attended events in the past it was all about celebrities and red carpets, not about journalists. She said she got into a fight with former Fox News host Greta Van Susteren about the network bringing Lindsey Lohan to the dinner as their table guest.

McCain cited a poll of 89 percent of Republicans, who believe that the national television and news media report fake news. She cited a fake quote from Jim Acosta that the right-wing has been spreading that disparaged Trump supporters. Co-host Sunny Hostin cut in to fact-check her, saying that Acosta never said it.

Hostin, who attended the dinner, noted that the entire dinner was about the scholarships handed out, the work of journalists and the First Amendment. It was only in the last 20 minutes that Michelle Wolf did her performance.

"It was about the celebration of journalism and the First Amendment," she shouted back.

Sara Haines noted that the final line of the stand-up was about how Flint, Michigan still doesn't have clean water.

"It might be a big fat gift to the Republicans but I take issue with you saying that we hate the middle of the country," Whoopi Goldberg said.

"I didn't say you," McCain said back.

"But the implication --" Goldberg responded while McCain talked over her.

"But, I'm talking about how conservatives and Republicans interpret this," McCain explained.

Joy Behar said that the table never disparages Trump voters, only the president. McCain said that she knew that but sometimes the audience will applaud things.

"Now you're blaming the audience?" Behar asked. McCain swore she wasn't and brought up Acosta again.

"Yes, but sometimes I think conservatives and Republicans forget that the tone of all of this really began really, you know, several years ago with Republicans making statements that felt quite not-inclusive," Goldberg said.

She said that from there the country moved on to President Barack Obama but then things changed.

"We do all this stuff and then we get somebody who comes in and begins this dialogue -- I think I brought this up, there was a poll that came out worldwide that journalists are now almost an endangered species," she continued. "People don't believe that journalists are telling the truth. They don't believe that people actually do what they're supposed to do in the news and they believe that everybody is lying. So now, when you have people who are actually lying, when you actually see the lie and you can prove it, what are you supposed to do?"

Goldberg wondered how the world is supposed to deal with accountability for actual lies in an era of the right proclaiming "fake news" at anything they disagree with.

"How are you supposed to say to somebody, 'is this a lie or is this not a lie?'" she wondered. "Because we have to make a decision as Americans. Not everybody in the media is bad. Not everybody in the administration is bad. Some people have actually tried to make stuff work. So I think that the correspondents' dinner, became about celebrities because they were bored with themselves. They're the ones who invite the celebrities to come."