A Cub Scout gives a salute. Image via Shutterstock.

A historic hardware store is under fire after a its clerk went on a homophobic rant against the Boy Scouts.

The Washington Post reported that a clerk at Nichols Hardware in Purcellville, Virginia allegedly turned a Boy Scout and his father away when they asked for donations for an Eagle Scout service project.

"You know they let homos in, right?” the clerk told bystander Carlyn Hamilton after kicking the Boy Scout out. "We do not support homos around here, I can tell you that."

Controversy began surrounding Nichols Hardware after a Yelp post made by someone claiming to be the boy's father began circulating in the community.

"Thrown out!!!” the Yelp reviewer wrote. “Can’t believe it. I have shopped here since 1985. Went in with my son to get help with his Eagle Scout project. . . . The employee started a rant about the scouts being destroyed, allowing girls and homosexuals to join scouting."

"We won't be back," the reviewer identified on the site as "Chip T." wrote.

Since the Yelp review was initially posted, others have joined in to condemn the more than 100-year-old store.

"Shame on you Nichols Hardware!" another one-star review read. "Your Homophobic actions and mean spirited treatment of this young Boy Scout and his father is reprehensible! Your employee is a clearly low class human being." 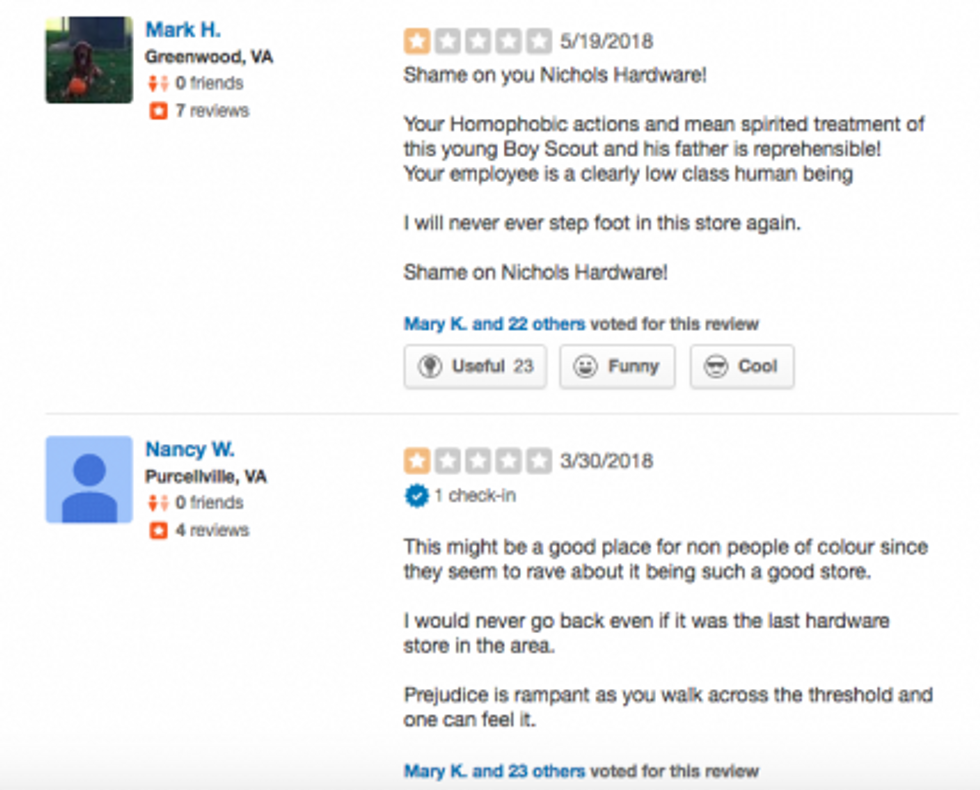 When the Post reached out to Nichols Hardware, a manager identified as Glenn initially called the clerk's comments "hearsay" before vowing to look into it.

“I won’t put up with it,” the manager said. “If it turns out to be true, he will be terminated.”