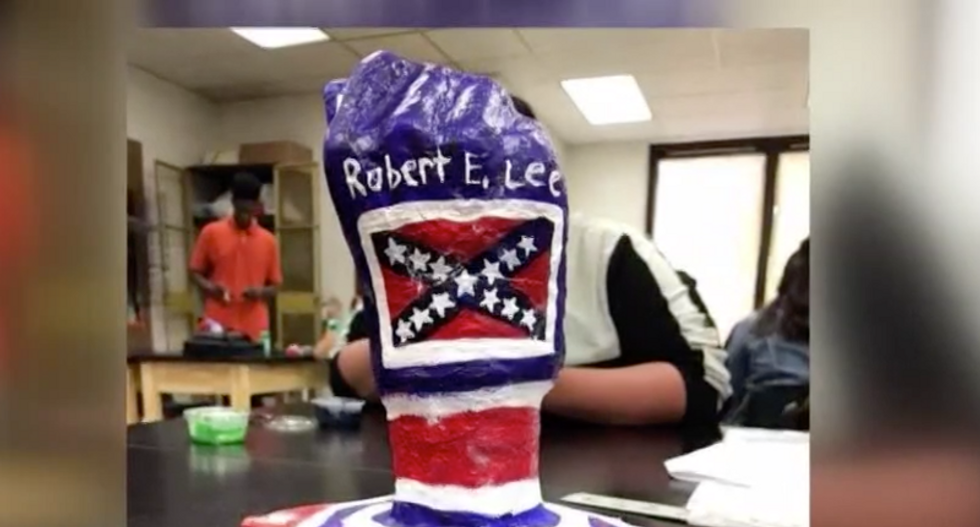 A Virginia high school teacher asked her student to redo his Confederate-themed art project because it promoted racism, according to 13News Now.

William Norman, a freshman at Nandua High School, said a teacher asked him to remake his art project the day before it was due.

The art displayed a ceramic sculpture of a hand, with "Robert E. Lee, history not hate" painted on it. Even though the teacher originally approved the design days later she changed her mind.

The school told Norman to change the project or receive an F.

Norman stood his ground. "I'm going to stand for what I think is right," Norman said.

"I was going to do what I planned. They can't approve it and then say you gotta change it after I worked so long on it. It's not fair to me, or anybody," Norman said.

His parents got involved and told the school the artwork was about heritage, and that Robert E. Lee was their third cousin.

"We were on the second ship from England that came to America, so my bloodline goes way back when America first started," his father, David Norman said. "I'm not a racist, the furthest thing from it. My son's not a racist."

The school eventually allowed his artwork to be displayed. The Accomack County Public School did not immediately respond to a request for comment.