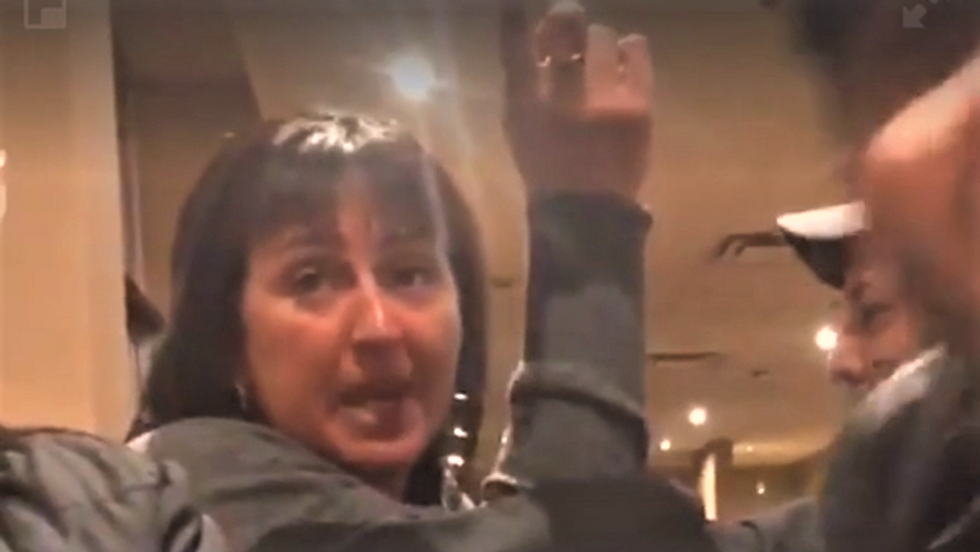 A Canadian woman was recently caught on camera angrily berating a group of immigrants at a Denny's restaurant in British Columbia -- and now it's cost her her job.

CTV News reports that the woman, identified as Kelly Pocha from Cranbrook, B.C., was filmed telling a group of immigrant men to "go back to where you came from."

The woman then threatened to attack the men physically.

"You want to see a Canadian woman come and brute on your f*cking ass?" she said to them. "It's my f*cking home. I was born and raised here. You f*cking weren't."

After the video of the incident was posted on Facebook this week, Pocha was promptly fired from her job as a car saleswoman.

According to CTV, Pocha apologized for her racist rant but insisted that she was merely standing up for herself, as she accused the immigrant men of showing her disrespect.

"Yes, my lash back was inappropriate and racial, but I was merely standing up for myself as I was being disrespected that night," Pocha said. "It is also disheartening to see that people are so quick to judge and make racial/degrading comments about myself and my family without knowing the whole truth."

Prosecutors are risking their careers by refusing to enforce some controversial laws passed by Republican legislators in various states.

The elected law enforcement officials have said they're doing the right thing by ignoring GOP-passed bans on abortion, voting restrictions, limits on protest activities, discriminatory laws against LGBTQ people, and restrictions on mask mandates, but even prosecutors in heavily Democratic strongholds will eventually have to face voters, reported The Associated Press.

According to a report from Politico, a convicted former Florida tax official who is often described as the "wingman" for Rep. Matt Gaetz (R-FL) during his partying days, has successfully forestalled his sentencing after pleading guilty to sex crimes last year because he is still providing an "unexpected' wealth of information to federal investigators.

On Monday, U.S. District Judge Gregory Presnell agreed to move Joel Greenberg's sentencing out until March at the request of Assistant U.S. Attorney Roger Handberg who called the Gaetz associate, "a prolific criminal" in court.