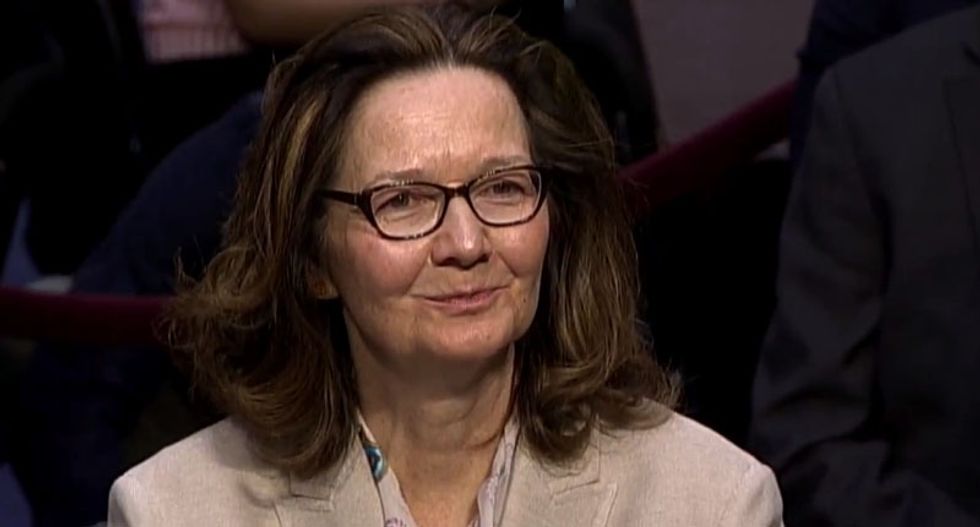 Gina Haspel, the veteran intelligence operative nominated to become director of the CIA, testifies in the Senate. (Screenshot)

In excerpts of her prepared testimony for a confirmation hearing at the Senate Intelligence Committee, Haspel glancingly refers to her role in the 2002-2005 program.

The CIA whisked detainees to secret "black sites" around the world where a number were beaten, waterboarded and underwent severe stress.

Ordered by George W. Bush's administration at the time, the program has since been judged deeply illegal, violating both US and international laws against torture.

"I understand that what many people around the country want to know about are my views on CIA's former detention and interrogation program," Haspel will say, according to the testimony.

"I have views on this issue, and I want to be clear. Having served in that tumultuous time, I can offer you my personal commitment, clearly and without reservation, that under my leadership CIA will not restart such a detention and interrogation program."

Haspel has lived most of a 33-year career at the Central Intelligence Agency in the shadows as part of its clandestine service.

President Donald Trump tapped the 61-year-old, who currently serves as deputy director of the CIA, to head the spy agency, after Mike Pompeo vacated the post to become secretary of state.

But confirmation has not been certain. Members of the Senate Intelligence Committee want to know more about her role in the 2002-2005 interrogation program, and her views of it.

Democrats worry that Trump and top aides, including Pompeo, are not opposed to the use of outlawed techniques like waterboarding in interrogations.

Underscoring the issue, Trump appeared to extol her past involvement in the post-9/11 interrogation program this week.

"Gina Haspel, my highly respected nominee to lead the CIA, is being praised for the fact that she has been, and alway will be, TOUGH ON TERROR! This is a woman who has been a leader wherever she has gone," Trump said.

Democratic senators have also sought to use the occasion of her nomination to force the CIA to make more public about the torture program.

"What I want to have happen at this session is that the American people see who this nominee is, and what her role was in this particular period," said Democratic Senator Ron Wyden.

"There is a substantial amount here that can be declassified without compromising sources and methods."

A specialist in Russian and Eastern European affairs, Haspel has served in several countries in the region and has run the CIA's European operations out of London.

But most focus on her role in the interrogation program. In 2001-2004, she was a deputy group chief of the Counterterrorism Center, which ran the program, and then chief of staff to Jose Rodriguez, who directed the program.

During part of that period, she oversaw the CIA's secret prison in Bangkok, where Al-Qaeda suspects Abu Zubaydah and Abd al-Rahim al-Nashiri were repeatedly waterboarded during lengthy interrogations.

While she is endorsed by many top former CIA and intelligence officials -- including a number critical of Trump -- human rights groups and former military officers have criticized her nomination, saying the use of torture only serves to empower US enemies and endangers US troops.

"The torture of detainees in US custody during the last decade was one of the darkest chapters in American history," said Republican Senator John McCain, who was tortured as a North Vietnamese prisoner of war from 1967 to 1973.

"The Senate must do its job in scrutinizing the record & involvement of Gina Haspel in this disgraceful program," he said.

"It is clear to most members, if not all members, that Gina Haspel is the most qualified individual that I've seen in the 24 years that I've served in Congress to head that agency," he said.

"Some have requested that documents that deal with covert action be made public and declassified. That has never happened in the history of the CIA and it's not going to happen with Gina Haspel's nomination."