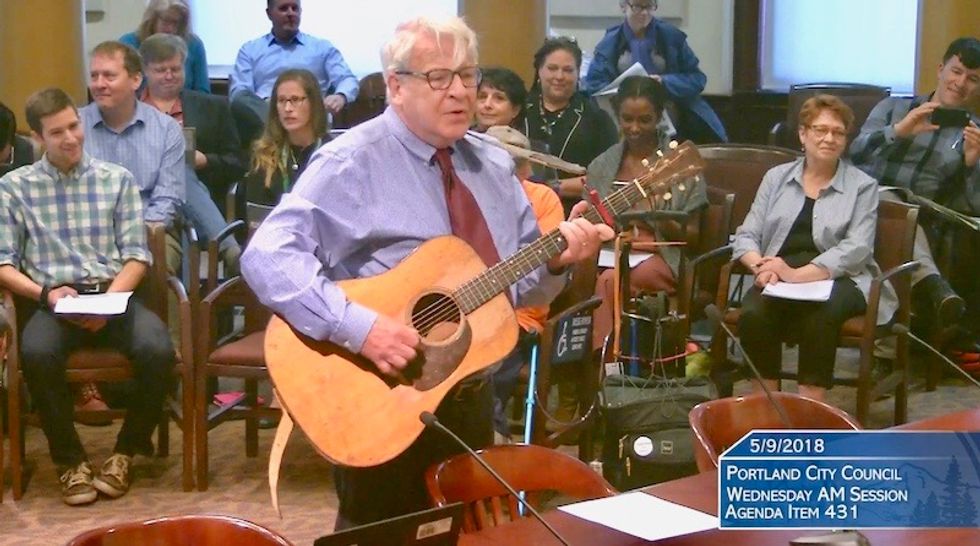 The rapidly growth of Portland, Oregon has led to the sort of serious congestion and brutal rush hours typically associated with larger West Coast cities.

To fix the problem, the city council is eyeing an expansion of the city's main interstate, the 5, in the area around city's sports stadiums.

Urban planners who study traffic tell you this is a bad idea because of "induced demand," which causes building more freeways to make traffic worse. But try explaining that to traffic-bound rush-hour commuters.

Portland resident Paul Rippey tried to break through by explaining this very dry concept to his city council Wednesday, telling the story of the city's interstate system from the 60s on to today.

"We all like to drive around town, but you can't help but noticing how much it's slowed down," he sang. "And adding more lanes is never done, because if we build them they will come—that's the thing we need to understand, it's induced demand."

"It should be clear the system is broken and adding more lanes is just a futile token," he sings. "Because the thing we need to understand is induced demand."

Despite Portland's reputation as a laid-back hippie haven, city council meetings have been tense during the reign of Mayor Ted Wheeler, with activists shutting down several meetings after police killed an unarmed black teen and again after the police violently suppressed an anti-Trump march down city sidewalks using techniques that spurred an ACLU lawsuit.

Rippey's song is very catchy and he received a warm reception, with council member Amanda Fritz even asking the mayor to suspend the rules so that she could clap. (Her request was ignored—Mayor Wheeler is a very serious man.)

However, Rippey did receive a smile from Commissioner Chloe Eudaly, who once viciously lashed out at woman that read poetry to the council, so Rippey can count himself lucky.

Watch his performance below, or skip to the second video for the studio version of "Induced Demand."