WATCH: Trump fan tries — and hilariously fails — to rip up ‘antifa’ sign as onlookers mock him 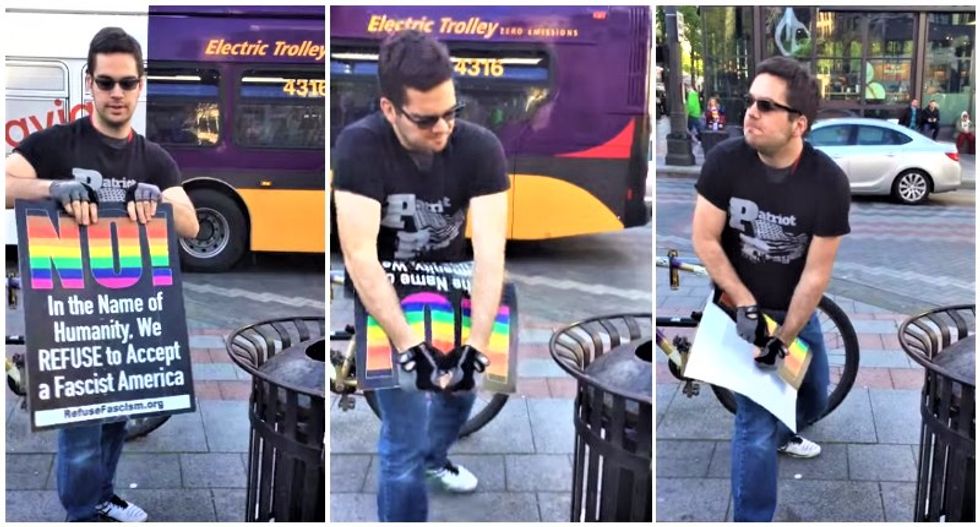 A member of the Patriot Prayer organization fails to tear up an anti-fascism sign (Screen cap).

A member of Patriot Prayer, a pro-Trump organization that regularly organizes "free speech" rallies in the president's name, was caught on camera trying --and hilariously failing -- to rip up an anti-fascism sign.

In a video posted on YouTube by user Nate Gowdy, a man wearing a Patriot Prayer shirt picks up an anti-fascism sign that was brought to a May Day demonstration at Seattle on Tuesday and attempts to tear it up to throw it in the trash.

As the man struggled to tear up the sign, the woman filming him mocked him and informed him that there are "a lot of engineers" who live in Seattle that could help him successfully tear up a piece of cardboard.

After he once again failed to tear up the sign, the woman laughed at him and suggested that he take the lid off the nearby trash can and just stuff the sign into it without ripping it up.

As he proceeded to lift the lid, she then mocked him further by telling him that he "needed a liberal" to help him dispose of a sign he didn't like.

This humiliated him even further and he then decided to not throw the sign away in an act of defiance against his female tormentor. He then angrily walked away -- while still holding the sign.