'You went from deflection to pandering': Jake Tapper calls out Bernie Sanders for ridiculous answer on 2020 run 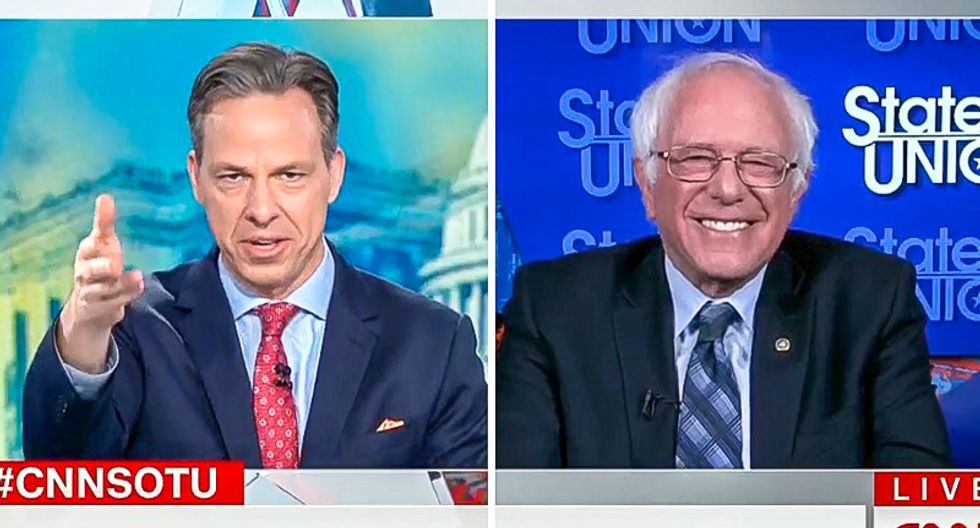 CNN host Jake Tapper on Sunday called out Sen. Bernie Sanders (I-VT) after he refused to say whether he would run for president in 2020.

While speaking to the Vermont senator on CNN's State of the Union program, Tapper noted that Sanders had endorsed a book titled, Run, Bernie, Run, which was written by his former campaign manager, Jeff Weaver.

"Are you going to follow Jeff Weaver's advice?" Tapper wondered.

"Well, I'm going to urge everybody to read the book," Sanders replied. "It is a very good book and Jeff did a great job for me in my campaign. You know, we started in that campaign with, I think, 3 or 5 percent in the polls and we ended up winning 22 states and Jeff was one of the reasons we accomplished that."

"Not really an answer to the question," Tapper observed. "But I understand you don't like answering this question."

"Well, let me also answer this," Sanders interrupted with his finger in the air. "Jake, let me take this opportunity to wish my wife and all the mothers of this country a very happy mother's day. How's that for an answer?"

"You went from a deflection to a pandering," Tapper laughed. "So, I love it."