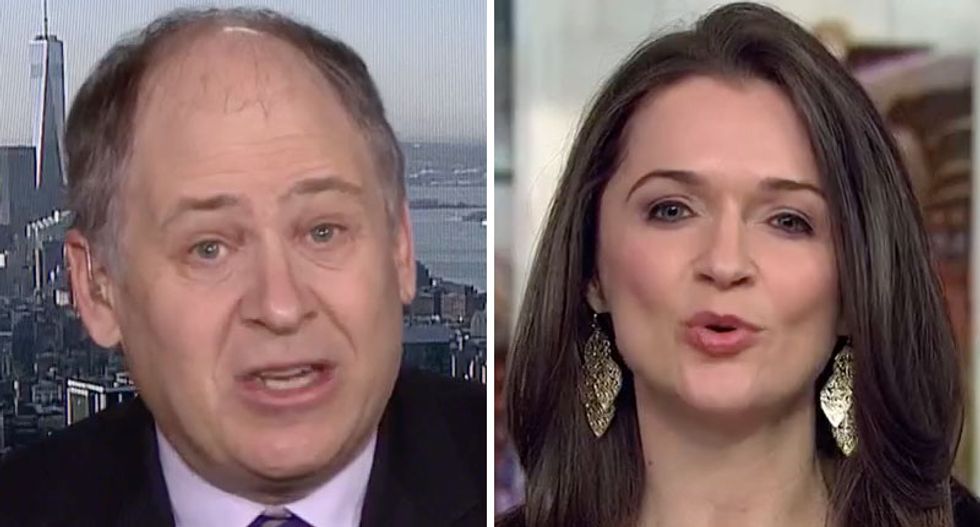 A conservative pundit declared President Donald Trump "innocent" of all accusations being investigated by special counsel Robert Mueller, during a Saturday morning appearance on MSNBC.

Carrie Sheffield, national editor at the right-wing Accuracy In Media, also lashed out at the Federal Bureau of Investigation during the interview with anchor Alex Witt.

"Carrie, which side of the coin do you fall on?" Witt asked. "Is it a legitimate investigation or is it a witch hunt?"

"So I supported a legitimate investigation," Sheffield claimed. "But I think the longer this has dragged on, and we see reportedly that Mueller was one of the key figures in opening this Stormy Daniels' mess, this is way far beyond the bounds of his original confines, which was to investigate collusion from the Russians that hasn't happened."

"The more and more we see obstruction on the part of the FBI as it relates to separation of power," she continued. "They are obstructing members of Congress who are trying to get to the bottom of the partisan nature of the Steele dossier."

"So the more we unpeel the layers, the more we see there is a partisan motivation for this investigation, which stems from the Clinton dossier," she claimed.

"But Carrie, can it also be, the more you peel the layers, the more information you're finding, the more things point to something potentially?" Witt asked. "And you have to investigate them?"

"I think the answer is no, because nobody seems to," the host continued. "This guy is playing things close to the vest. So how can you say there's no 'there' there?"

"How do you know conclusively?" Witt asked.

"This is different from Watergate, so it's offensive for to you make that comparison," Sheffield claimed. "It's inaccurate and it's something that happens in the liberal media over and over again to try to obscure the truth, that's why middle Americans are sick of this."

The conservative pundit suggested that Bill Clinton would be a better historical comparison.

"I think the more accurate one is probably Bill Clinton, because he won re-election," she argued, despite his impeachment occurring after Clinton's successful 1996 re-election.

"I think you're wringing your own neck here, Carrie, I don't need to say very much," Alter observed. "But you're not in any position to make a judgment about when this investigation has run its course, nor is Donald Trump, Mike Pence or anybody else."