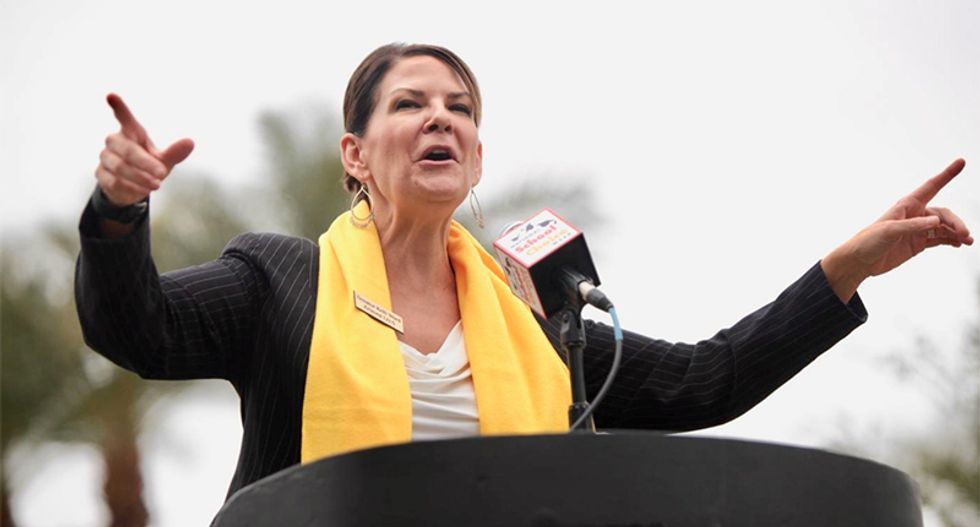 Arizona senate candidate Dr. Kelli Ward can't ward off white supremacists from flocking to her campaign, according to The Arizona Republic.

An op-ed Monday pointed out that once again the candidate is being forced to back away from one of her supporters. Wisconsin congressional candidate Paul Nehlen called Ward "a friend. Nehlen, who describes himself as a “pro white Christian American candidate.”

At a rally for Alabama senate candidate Roy Moore in December, Nehlen told the press that Moore was just like him and Ward.

Just two months following the interview, he was banned from Twitter for racist attacks on Meghan Markle. The online racism even prompted Breitbart to kick him to the curb. Even the Wisconsin Republican Party has told the GOP member that he isn't welcome.

Despite all of this, it took until just last week -- a full six months -- for Ward to disavow Nehlen. She told CNN in an interview that Nehlen’s “recent views” are “outrageous.” It's unclear what she considers "recent."

"Paul Nehlen and I both ran against powerful establishment incumbents in 2016, so our paths crossed a few times in that regard," Ward said in a statement. "However, recent views espoused by Nehlen are outrageous and antithetical to my own. Nehlen and other fringe elements who hold similar views have absolutely no place in the Republican Party."

She went on to say that she disagrees with his statements, which she said "has nothing to do with her."

It isn't just Nehlen, though he's the most recent offender. Ward has palled around with the likes of Steve Bannon, who called Ward "a whirlwind" while helping kick off her campaign last year.

After he was shoved out of the White House, however, Ward told CNN "he was never an advisor" to her campaign. "He’s not somebody that I would reach out and talk to in any way, shape or form.”

"She wanted me to come out here to convince you that she understands national security, but I don't need do that," he told a Scottsdale rally. "This is a woman who has common sense. This is a woman who gets things done. Just like someone else I know."

He remains one of few she has not backed away from, despite being linked to a "quasi-Nazi Hungarian nationalist group," The Republic said.

"But I do wonder why it is that people like Paul Nehlen would support Kelli Ward," wrote Laurie Roberts for the Arizona Republic. And I wonder whether she wonders about that. If she doesn't, she should be asking herself this question.