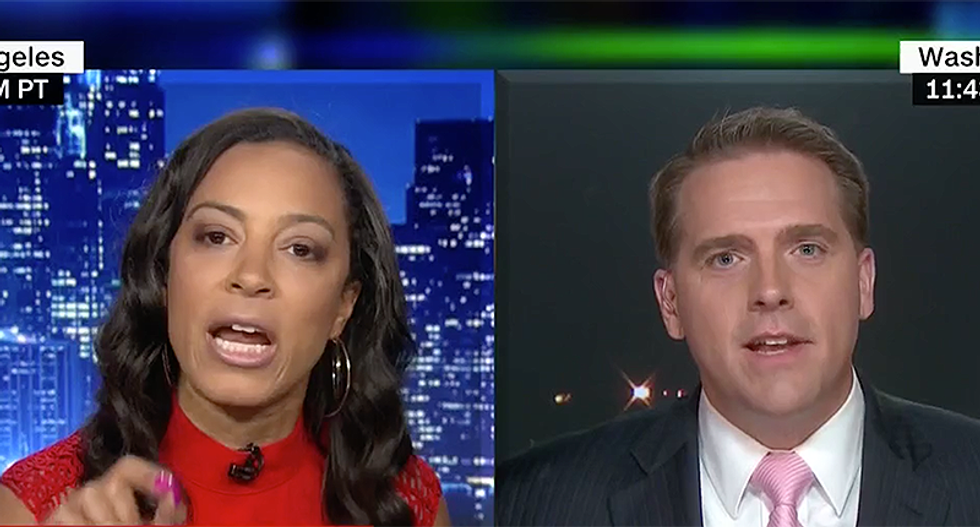 During a panel discussion between CNN's Angela Rye and Scott Jennings, the conservative commentator seemed to take a tone of condescension at his fellow panelist, which sparked a passionate response from her.

Rye began by challenging Attorney General Jeff Sessions, who seemed to laugh off comparisons of his policy to Nazi concentration camps or Japanese internment camps.

"First of all, this is no laughing matter, particularly from the attorney general who is responsible for enforcing laws throughout this country. No, these children are not MS-13," Rye said in response to conservative claims the children could be dangerous.

She then turned to address the reality of the votes and allegations Democrats are to blame, saying "I'm trying to figure out how the Democrats became the majority in the Senate and the House."

"I hate to explain rudimentary procedure to you," Jennings replied, his voice dripping with condescension.

"I'm going to tell you what," Rye cut in. "You don't ever have to explain anything rudimentary to me. Let me be very clear: what I'm telling you is you should know that they have more than enough votes to do what they need to do."

"Can you count to 60? We have 51. Come on," he replied, trying to claim obstructionism was causing problems, but those were the last words he was able to get out for the remainder of the debate.

"No, you come on. You better watch it Scott, seriously," she retorted. "What I'm trying to tell you is that you have a majority... Here's what you're battling with, morals, moral authority. Where is the moral authority of this party that has blindly endorsed all of Trump's bigotry, xenophobia, racism? That is what is behind this policy. The reality we are all facing now is there are children paying the penalty for no reason when their parents are coming here seeking asylum."

She noted that every panelist on CNN that evening talked about those seeking asylum from gangs like MS-13 and violence, but "your attorney general doesn't know any better because they haven't asked the questions."

"They have not taken a single moment to find out why these people are risking their lives to come to this soil where they're put in harm's way. So, how's that for counting?" Rye closed.