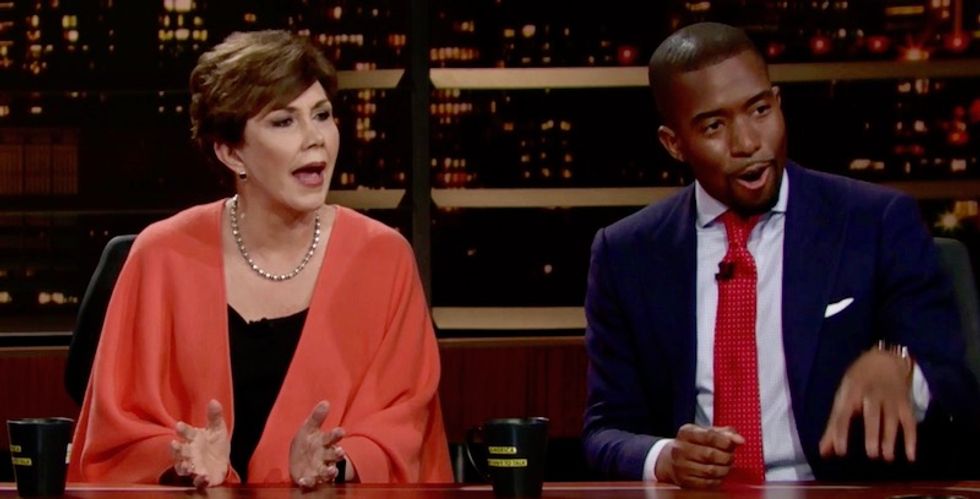 Two un-Trump Republicans got into a fierce fight over immigration on HBO's Real Time with Bill Maher on Friday night.

Former George W. Bush staffer Linda Chavez took a pro-business view and called for more immigrants to stem the current labor shortage. On the other side, Shermichael Singleton, columnist for conservative news outlet The Hill, said that Americans should be doing all the jobs immigrants are doing.

"We need more immigrants," Chavez said. "We need more legal immigrants in the United States. We have a tremendous labor shortage in this country right now. And it's not just STEM workers, it's people who work in poultry processing plants, people who clean toilets in buildings, people who take care of other people's children."

Singleton said Americans should be doing those jobs.

"Can we not prioritize those jobs for our own people?" Singleton said.

"No, because our own people do not want them!" said Chavez.

"So Linda, we should demand that our own people take those jobs," Singleton said. "Linda, there are folks in rural America, there are people in urban America, who need jobs."

CNN analyst John Heileman then said he wanted to bring the conversation back to Trump.

"The president said he was going to build a wall. There's no wall, we're not any closer to building a wall," he said. "He never promised to rip families apart... he's a big, fat f*cking failure on the one thing he promised and he's a thing on the other side. That, to me, is a winning issue."

Bill Maher saw a silver lining: The labor shortage, inflation and other issues could crash the economy.

"I feel like the bottom has to fall out at some point. And, by the way, I'm hoping for it, because I think one way you get rid of Trump is a crashing economy," Maher said. "So, please, bring on the recession. I'm sorry, if that hurts people but it's either root for a recession or you lose your democracy."